You are standing in front of the blinking slot machine. You hold your breath as you watch the banana icons inch closer and closer to each other,

but ever so slowly come to a stop one position away. You were so close! Too bad. The flashing lights and loud buzzer on the slot machine only serve to fan your disappointment and encourage you try to again. You can’t give up! You were so close last time. You have to try again.

“Near-miss” events like this seduce us to continue gambling and may be associated with the addictiveness of gambling. A near-miss is when the matching symbols stop one position away from each other. Neuroscientists at the University of Cambridge explain how near-miss outcomes actually activate reward circuits in the brain just like any reward.

Interestingly, the only situation in which a near-miss increased a participant’s desire to continue playing was when the participant and not the computer hit start on the slot machine. This can be related back to the “illusion of control” created by gambling: we interpret the near-miss as evidence of acquired skill, making us want to play again because we believe we have a greater chance of winning next time. It was also found through imaging techniques that near-miss outcomes were related to more brain activity in regions of the brain linked to behavior reinforcement, called the mesolimbic reward system. 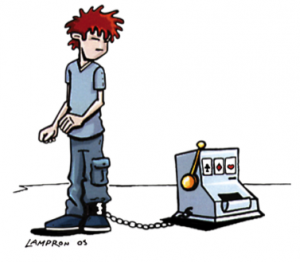 The way slots are engineered, in that they make you want to play more while also persuading you that you are getting better, can lead to the development of gambling addiction. This study showed that subjects who wanted to continue to play the most had the most activation of the anterior insula, part of the mesolimbic reward system. Other research has reported that patients with insula damage were able to quit smoking much more rapidly and without persistent urges to smoke than patients with damage to other regions of the brain (Naqvi et al., 2007). The authors of this study believe that overactivity of the insula during gambling may be a risk factor for gambling addiction.

A small but significant portion of the population (1%-5%) is “addicted” to gambling (Potenza, 2006; Shaffer et al., 2004). Cognitive research (Langer, 1975; Wagenaar, 1988) proposes that gambling is so alluring because it possesses certain characteristics that foster an exaggerated confidence in one’s chances of winning. This study shows that near-misses make you want to gamble more by activating reward circuitry in the brain, but only if you are the one pressing the start button.

Nadia Georgieva, friend of author Tess Litchman. She is a Government and French Studies double major with no background in the sciences, so she provided very insightful advice about how to make this press release more accessible to a general audience.

Charisse Litchman, mother to author Tess Litchman. She also provided insightful advice about how to make this press release more accessible to a general audience as well as made some helpful grammatical and word choice suggestions.

David Reinthal, classmate in NS&B 227: Motivation and Reward. He provided some helpful advice on how to make the beginning more suspenseful. He also drew my attention to some areas that were still too technical and needed to be made more applicable for a general audience.