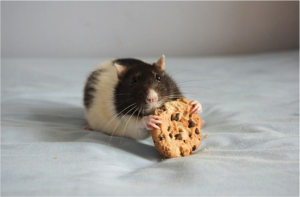 Have you ever eaten twelve cookies in one sitting while your friend has only had one? There may be an explanation for why you are struggling to resist! In a society where obesity and weight gain is becoming more and more prevalent—in 2012, a startling 67.6 million Americans were reported obese and 65.2 million overweight[1]—the obese are often branded as overeaters who don’t exercise. Laziness and self-control may tell a fraction of the story, but the reality is that there are individual biological differences that may contribute as well. A study conducted by MF Robinson et al provides evidence that there are biological predispositions that may make one more inclined to reach for that extra brownie.

PepsiCo markets Lay’s potato chips with the slogan “betcha can’t eat just one.” So why is it so hard to resist and limit ourselves when it comes to our favorite caloric, highly sweet, fatty junk foods? The answer is cues and incentives. Imagine this: a warm chocolate brownie topped with rich, melting vanilla ice cream drowning in a dense fudge sauce. Without even physically tasting it, your body has a natural visceral reaction that increases your inclination to consume the appealing dessert. Delicious smells, colorful presentations, captivating advertisements, and even how you’re feeling are all cues that impact consumption. Huffington Post writer Renee Jacques states, “Companies spend billions on marketing their products and conducting scientific studies to figure out how to engineer their foods to keep you eating.”[2] With all of these factors in place and genetic differences too, it can be incredibly hard to resist.

The study conducted by MF Robinson et al found that there are individual differences that may make one more susceptible to the motivational effects of food cues which elicit one’s craving to eat and increase the amount of food consumed. Rats were given a diet of potato chips, cookies, and peanut butter for a month. After the diet exposure, rats either gained notable weight or did not. It was observed that the rats that had gained weight displayed a heightened behavioral approach towards food cues prior to the development of obesity. These rats showed increased willingness and obsessive desire to gain access to sugar cues; these rats showed a higher number of nose pokes to obtain presentations of the sugar cues. The data obtained from this experiment provides compelling evidence that obesity may be predisposed in certain individuals.[3]

Next time you reach for that second slice of cake think about the factors that may be impacting your decision. Certain individuals are simply predisposed to be more attracted to a dense, moist slice of ooey gooey chocolate cake. With this information in mind, hopefully you can make a healthier decision.