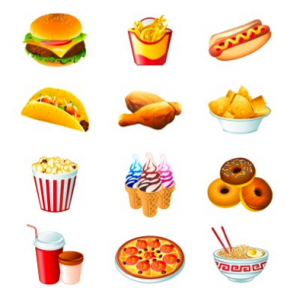 Do you find certain tasty treats too hard to resist? I’m sure most of us have. There is now compelling evidence that certain foods—particularly high fat, sweet, and salty goodies—may be as addictive as drugs to certain people! These “food addicts” have compulsive urges to overeat due to similar changes in the brain seen in drug addicts—a scary thought!

The Yale Food Addiction Scale is a questionnaire that identifies those who are most likely to be food addicts (Gearhardt, Corbin, & Brownell, 2009). This new diagnostic tool provides sound assessment and is a critical step to advancing food addiction research . Both YFAS-diagnosed food addicts and drug addicts have elevated dopamine-signaling strengths in the brain (C. Davis et al., 2013; Wanat, Willuhn, Clark, & Phillips, 2009). Dopamine is a neurotransmitter in the brain that plays a major role in reward and motivation . This finding proposes that hyper-responsive brain reward mechanisms serve as risk factors for drug and food addiction. Excessive consumption of either drugs or food increases cravings, which have been shown to increase the risk for relapse (C. Davis & Carter, 2009).

The Diagnostic and Statistical Manual of Mental Disorders (DSM) is the standard classification of mental disorders (American Psychiatric Association, 2015). The most recent edition has acknowledged addiction doesn’t have to be drug-related, thus opening its doors to the fact that food addiction can be an addiction and is a serious problem.

With more than 2/3 of the U.S. population being overweight or obese (U.S. Department of Health and Human Services, 2012), there is increasing research in food addiction. It is a relatively new and controversial term, and is characterized by “compulsive overeating accompanied by strong cravings and extreme difficulty in abstaining from highly palatable fare” (Curtis & Davis, 2014). There has been criticism on the use of the word “food” in food addiction. “Food” connotes substances essential for survival, but food addicts crave and over-consume high fat, processed foods not grown in nature (Curtis & Davis, 2014).

A recent study has found that when YFAS-food addicts are administered methylphenidate, a stimulant drug that increases dopamine transmission and suppresses appetite, they show no food-intake suppression . Instead, they eat as much as they would have in the absence of the drug. When a normal functioning dopamine system is stimulated, it causes food-intake suppression, but in food addicts, it instead causes an increased motivation to eat that can overcome appetite-suppression effects. This suggests that a food addict’s response to dieting mechanisms may be blunted due to increased motivation.

The fact that food can be as addictive as drugs is scary to us I’m sure, as obesity and probably food addiction are on the rise. Since food addiction is a new theory, more research is being done to understand and find treatments for food addiction. Programs like Food Addicts in Recovery Anonymous, which is based on the 12-step program that has helped many people addicted to alcohol or drugs, have been shown useful to some people. Despite all this evidence, we still can’t be sure if the brain changes are a cause or consequence of food addiction. Our next step is to look into the brain to find an explanation for the eating differences seen in individuals with food addiction.