Ever felt hungry while watching your favorite TV show? I know I have eaten a pint or two of Ben and Jerry’s during an episode of Game of Thrones for no apparent reason. This may seem harmless but the 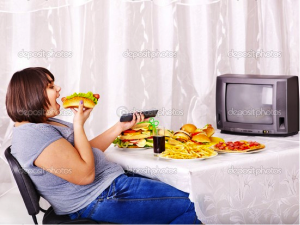 issue arises from the fact overeating occurs more and more often every time people sit down to watch TV. In the United States, food commercials during TV programs may be part of the problem. Researchers at Yale conducted a study to confirm if TV ads have control over how much we eat and what foods we choose to eat.

Children enjoying a few Oreos and watching SpongeBob every now and then is perfectly ok. Doing them together daily can potentially lead to obesity. Watching television is not the problem and neither are Oreos; it appears that children who saw food commercials ate 45% more food (Harris et al., 2010). So if your child watches TV regularly it is best not to have any junk food around because chances are they will eat a whole bag of Doritos in one sitting. If this becomes a regular eating habit then a child is more likely to become obese. In the U.S. it is estimated that 12.7 million children are obese (Ogden et al, 2014). That is not acceptable as childhood is the time in life when individuals should be the most physically active. It is not just children who eat more; the study showed food-commercials have the same effect on adults.

If junk food ads can get people to eat more junk food, then wouldn’t having more healthy food advertisements make people healthier? In a second part of the study it was demonstrated that ads that focused on nutritional content over enjoying tasty food did not make people want to eat healthier food (Harris et al., 2010). Now the solution must be to get people to make better eating choices, right? Personal habits do play a role but there is more to it than that.

In order to deal with the obesity epidemic there needs to be a change in what is presented to consumers. Chances are there’s an ad around you at this very moment, whether it’s on your computer or down the street. If other media have as much or more influence as TV does over how much we eat; then a combination of ads from different media could further increase overeating therefore obesity. This raises a fundamental question for a future study: Does commercial priming only influence consumers through television or do pop up ads, newspaper ads and billboards have the same effect? Studies such as this one are crucial; they reveal how the media is telling us what and how much to eat. More evidenceof this should make people aware and hopefully lead to a decrease in commercial priming. By 2030 it is predicted that 86% of the U.S population will be overweight or obese (Wang et al 2008). I don’t want America to resemble the people in Pixar’s 2008 hit Wall-E.