Advertising is everywhere. You can’t avoid it: whenever you drive on the freeway, listen to the radio, read a magazine, surf the web, or turn on the television, you are exposed to advertising. The purpose of advertising is to make the viewer want to purchase or consume whatever product is being displayed. But how much does advertising really affect our behavior? Does exposure to food advertisements lead to over-snacking, thus fueling America’s obesity epidemic? According to a recent study conducted at Yale University, the answer is yes.

Advertising relies on what are called “external cues,” which are signals in an environment that—often unconsciously— trigger a certain behavior. For example, advertisers love to show attractive people having fun w 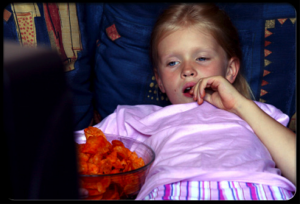 hile eating a particular brand of snack food in order to make the food appear appealing and “cool” to the viewer. These external cues prompt the viewer to imitate the behaviors of the people in the commercials, including food consumption. They are so powerful and pervasive in the culture of advertising that this phenomenon happens regardless of whether the viewer is actually hungry.

It is no surprise a child would be unable to resist snack foods, but what about adults, who presumably have some concept of self-control? A second part of the experiment tested the affects of snacking on two groups of adults: a group who watched television with snack food ads and a group who watched with health food ads reminding them of importance of moderation in consumption. Both groups were provided with snacks, and although neither group was hungry, those who viewed the snack food commercials ate more than those who viewed the health food commercials with a focus on nutrition. These findings confirmed what the children showed us: food advertising encourages more snacking and calorie consumption even if you are not truly hungry. In addition, food advertising is not all about brand names. It’s about using the psychology of external cues to the advantage of the food companies to make you want to buy a snack even if your body doesn’t actually need to be fed.

So don’t be fooled. If you’re trying to watch your caloric intake, make sure you don’t fall into the “monkey see, monkey do” trap of advertising. Or, just keep some carrots nearby when you’re watching television!