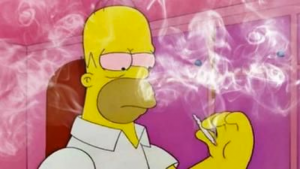 Most people know that smoking weed can make you a bit more like Homer Simpson. You maybe feel a little slow, less intelligent, and really crave doughnuts, but these are only the short-term effects of marijuana. What marijuana does in the long-term is more uncertain. Yet, as more states legalize marijuana, it is increasingly important to understand its long-term effects.

Understanding the long-term effects of marijuana was the goal of a recent study by researchers at the Massachusetts General Hospital. The researchers believed that marijuana, like other abused drugs, could have long-term effects. Therefore, they compared brain images of marijuana users and non-users. Importantly, the study used participants aged 18-25, who were non-dependent users, meaning they did not show any effects of tolerance or withdrawal form marijuana. Despite focusing on non-dependent marijuana users, the results would make anyone, even Homer Simpson, think twice before taking their next hit. The participants who smoked at least once a week showed significant brain differences when compared to the non-weed users. The users’ brains, when compared to the non-users’ brains, differed in size, shape, and volume in two brain regions, the nucleus accumbens and amygdala.

Changes in the nucleus accumbens and the amygdala should concern anyone who has smoked weed or is considering smoking weed for two reasons. First, the nucleus accumbens and the amygdala are believed to be reward-centers in the brain. They respond to rewarding experiences like food and sex. Our brain wants us to keep performing those activities, but drugs can hijack this system, which motivates us to take more drugs. Drugs universally accepted as addictive, such as cocaine, act on these brain regions. According to this study, marijuana also affects those reward-centers. Furthermore, the observed changes could signal the development of marijuana addiction, a drug frequently considered safe, because it is considered non-addictive.

The findings of this study are more alarming, because these brain changes are seen in non-dependent 18-25 year olds who have been smoking weed for a very short time. Additionally, the researchers found that the amount of brain change is correlated with the amount of weed used. In other words, the more participants smoked, the more their brain changed. Therefore, someone who smokes weed for a longer time may have even more alterations to their brain. This implies that people who have smoked more weed than the participants in this study may have greater changes in their brain, suggesting a greater risk of addiction.

Still, before you go running off saying that marijuana is destroying your brain, remember that this study only shows a correlation between smoking marijuana and brain changes. Although brains change frequently, these changes are worrisome because weed alters areas associated with addiction. Still, this study does not demonstrate the definitive consequences of continued marijuana usage, but it does show that there are effects from marijuana use and that further research is needed to determine whether people really do get addicted to the ‘high’ life and what the consequences of that may be.