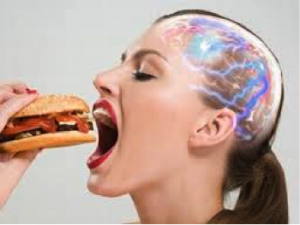 In a world of calorically dense foods and rising rates of obesity and eating disorders, are we setting ourselves up for another “war on drugs”– except this time on doughnuts? Recent studies show that drug addiction and food addiction can look similar in terms of behavior and brain wiring. However, food addiction is not yet clinically recognized as a disorder in the Diagnostic Statistical Manual of Mental Disorders (the prescriptive bible for the American Psychiatric Association). In 2009, the Yale Food Addiction Scale (YFAS) was created by substituting “food” for “substance” into seven criteria for drug addiction in the DSM IV. Scientists, such as Dr. C Davis, are using this as a model for studying food addiction.

But how does this scale qualify food addiction? In the same way that recreational pot smoking does not make an addict, reaching for that second cupcake is not food addiction. Certain factors in drug addiction such as compulsive, destructive behavior, an inability to stop despite knowing aversive consequences, and associated changes in dopamine pathways in the brain could apply for food addicts as well. Dopamine is involved in motivating reward-seeking behavior– the prominent neurotransmitter in drug addiction research. The study of dopamine in addiction could link the behavior of drug addicts to say, those addicted to fatty, sugary foods. In a recent study, Davis noted a difference between dopamine signaling-strengths in patients with YFAS food addiction compared to patients who did not qualify as addicts.

This study took twenty-three food addicts (determined by the YFAS) and a group of non-addicts with comparable mean age and BMI. The subjects were given two pills one week apart, a placebo or methylphenidate- a psychostimulant often used to treat Binge Eating Disorder. After both, the subjects were given their favorite snack to hold while reporting their level of food cravings and appetite. Then they could eat as much of the snack as they wanted. The study measured cravings, appetite ratings, and percentage of snack consumed. As expected, results showed that “food addicts” scored higher on the craving and appetite ratings, but the drug did not significantly affect their food consumption. Meanwhile, “non-addicts” ate far less of their favorite snack after methylphenidate. The drug did slightly lower the “addicts’” reported craving and appetite, yet did not stop them from eating more of their snack than the “non-addicts”. The “addicts’” excessive motivation to eat their snack transcended their reported feelings of hunger or appetite. This is scarily similar to drug addicts’ intense motivation to get their drug of choice despite not cognitively wanting it.

Davis remarks, “Further research is required in our understanding of the brain mechanisms behind food addiction and their pharmacological treatments. Ultimately, we would like to see the DSM recognize this disorder.”*. We still don’t fully understand the complex effects of dopamine in regards to food addiction. As this study shows, there is a need for further study of pharmacological treatments for food addiction and Binge Eating Disorder, because clearly one size does not fit all.