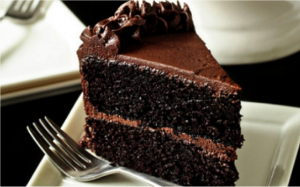 Would you rather have an apple now or a slice of cake later?

Maybe you had to contemplate this one longer.

The answer may seem obvious to you: cake now! But for women with a history of anorexia, this is not the obvious choice.

A recent study by Christina Wierenga in Biological Psychiatry 77.7 (2015)1 showed that women who have suffered from anorexia nervosa always see long-term. Whether it’s in relation to food, money, or another “reward,” they repress their urges and wait for the long-term goal. Over time, waiting becomes the norm, which explains why prior anorexics—unlike most people—can keep from eating, even when starving.

And so we’re back to the original question:

Would you rather have an apple now or a slice of cake later?

Would your answer change if you were hungry?

Wierenga used this method in her study of women’s responses to food, substituting in money to prevent participant food-related anxiety. Two groups participated in the study—one, a group of women who’d previously suffered from anorexia, the other, historically healthy women. All participants answered questions twice: when hungry and when full.

If you’ve just won the lottery, and someone offers you $20 now or $40 later, it’s easy to wait. But if your car dies on the highway and you’ve forgotten your wallet, cash now is more enticing. Healthy women seem to think so. The study shows that healthy women chose the immediate reward when hungry, but the delayed reward when full, while the prior anorexics—starving or stuffed—consistently chose the delayed reward. This concept mirrors that of food: while most people will choose immediate food when hungry, women with a history of anorexia will wait.

This suggests that prior anorexics are able to resist eating even when their body desperately needs food, indicating an inability of the brain to factor the body’s basic needs into decision-making. It’s as if these women aren’t just controlling their intake of food but their brain’s ability to sense hunger in the first place. Thus, hunger signals aren’t sent to stimulate the drive to eat.

Typically, the brain adapts. As we eat more or less, our body calculates how much food we need. Losing the motivation to eat when hungry can be life threatening, and can last for years. Anorexia nervosa has the highest death rate of any psychiatric illness2, yet scientists know little about it. Old axioms like “if you’re hungry, just eat,” don’t address the complexities of the disease. It is important to be aware of the changes that occur in the brain of anorexia patients, to be able to provide support and protection, as they truly need it.