Weed, pot, kush, dope, bud, and grass are all names used to describe the same drug: marijuana. Deceptively, the breadth of knowledge regarding marijuana and its effects does not match the expansiveness of its nomenclature. This is surprising since it is the most commonly used illicit drug in the U.S. In 2008 there were 15.2 million individuals that had used marijuana in the past month and it is now recognized as the most universally used drug on college campuses. Despite its widespread popularity, most of the research on marijuana has been conducted using an animal model. This has left a gap in scientific knowledge regarding the effects of marijuana use in humans. Weed users say they experience different ways of thinking while high, but new research shows that the drug may be changing the shape and function of their brains. 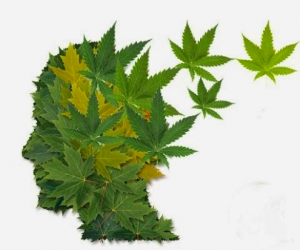 In 2014, Gilman and a team of researchers conducted a study to identify marijuana-related shape differences in the brains of forty young adults. Half of the study’s participants were non-dependent marijuana users, who smoked at least once a week but lacked the symptoms of dependency. The rest were non-users, who used the drug fewer than five times in their life. Gilman’s team imaged the participants’ brains and concluded that young, non-dependent marijuana users had observable differences in brain shape relative to those of non-users. The shape differences were found in the brain regions associated with reward, which are also the same regions implicated in addiction. Many of the differences were correlated with quantity and frequency of marijuana use, but not with the age that participants began using the drug.

Previous studies in humans have shown that marijuana use is associated with impairments of cognitive functions such as learning, memory, attention, and decision-making. In animals, the brain regions associated with these cognitive functions have shown structural changes after ingestion of marijuana. Gilman’s team, however, was the first to demonstrate that the same link between marijuana use and altered brain shape in these regions is also present in humans.

Gilman’s study is also notable because it demonstrates that the brains of young adults are affected by marijuana use, even in individuals that are not dependent on the drug. Since brain shape changes were observed in non-dependent users, it is likely that the brains of individuals that are dependent on the drug have even more significant shape and structural changes. A separate study investigated the brains of dependent marijuana users who smoked daily for at least two years (Arnone, 2008). These researchers found similar brain structure abnormalities in dependent users, which may underlie the cognitive and behavioral changes observed in this population, such as impaired memory, depression, and anxiety. Together, these studies suggest that the brain structure differences observed in non-dependent users could cause the same sorts of altered cognition experienced by dependent users.  All of this goes to show that regular use of reefer, Mary Jane, or ganja can cause your brain and behavior to change in strange and possibly undesirable ways.

Picture: https://dorothyjoseph.com “Smoking Marijuana At a Young Age Can Have a Negative Effect On Your Brain.” TNM News, https://thenationalmarijuananews.com/category-news-feed/smoking-marijuana-at-a-young-age-can-have-a-negative-effect-on-your-brain/#PhotoSwipe1512163159846.