Ever feel like snacking in front of the TV? Turns out that increased media viewing is contributing to an already growing obesity epidemic. Researchers were hungry for answers in a 2009 issue of Health Psychology. What are the effects of TV food advertising on food consumption in children and adults? 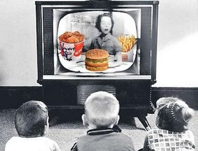 Food advertisements create mental representations in our minds that can lead us to engage in eating behaviors. Harris et al. call this automatic snacking—snacking that is outside of our awareness or intention. To test the power of food ads on eating habits, researchers conducted two experiments. Elementary-school-aged children watched a cartoon that contained advertising that was either related or unrelated to food. Given the choice to snack during the show, children consumed 45% more when exposed to food advertising. A child’s snacking might not seem problematic when contextualized as a single occurrence, but according to the authors, at this daily rate, 30 minutes of commercial television with food advertising and no change in diet or physical activity would lead to a weight gain of almost 10 pounds per year!

Is there an age limit? Adults watched a comedy show with food ads that promoted either fun snacking, like chips and soda, or healthy foods, like granola bars. Afterwards, they were presented with foods that were different from the ones advertised, and were asked to taste and rate both healthy and unhealthy options. As with children, food advertising increased overall consumption. Mindful eaters and men showed a trend towards eating the most, and they reported hunger levels as highest after watching healthy food advertisements. Oddly enough, those same participants consumed less than all participants, including those that weren’t exposed to food advertising at all. So if it’s not hunger, why do we feel like snacking in front of the TV?

Food advertising has the power to prime automatic eating behaviors that may be contributing to public weight gain and associated complications, such as poor health and disease. This research begs the question: even though we might think we choose when and what to eat, is it always a conscious choice? People will snack on available foods, regardless of the specific products they may have seen advertised on TV. Distracted eating seems to be a result of fun food advertising.

ividuals are often stigmatized, and these findings can inform social norms and public policy. Rather than addressing individuals, focusing on organizational changes, such as limiting food advertisements on television, could benefit people of all age groups. Furthermore, we might consider how to use healthy food advertising to inhibit snacking. Placing restrictions on the types of products that can be advertised on television could be the first step. That said, healthy advertising may cause people to snack less, but it won’t necessarily encourage better eating habits. Maybe a DVR is the answer, but in the meantime, there’s something we can do for free: increase awareness and care for the effects advertising has on consumption.