It’s been a longstanding tradition that on July 21st, my friends and I travel to Atlantic City for an epic weekend in New Jersey that rivals scenes from “The Hangover.” I’m fond of the elegant party scene that Atlantic City delivers, but befuddled by the gambling culture there.  On more than one occasion, the activities of the night conclude with my buddies ponying up the buy-in at a poker table gambling their chips away until the wee hours of the morning.  I sit nearby wondering, “How can they lose hand after hand and continue to play for hours?” 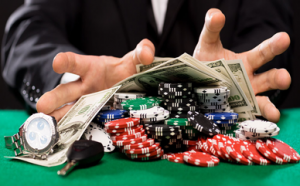 With a visible confidence, but internal reluctance, they know that they will not profit.  Inevitably they lose… yet ironically it seems that they couldn’t be enjoying themselves more!  What is it that causes this obscure behavior?  Scientists at the Center for Gambling Research at the University of British Columbia sought to uncover what about the games inspired the motivational effects experienced by gamers in casinos.  Their findings imply that it makes perfect sense that not only do they continue to play when losing, but also get great satisfaction from the experience.

The scientists structured their research around a number of key controllable variables.  The effect that losses disguised as wins (LDWs) had on players and the near-miss phenomenon (Sharman 2).  Basically, these factors describe scenarios where a person feels that they will win but at the last moment… they lose or don’t win straight out.  Think the last dial on a slot machine falling just short of that third cherry needed to complete a triplet for a win.  In Texas Hold’em, this is similar to the final card in a hand just barely causing a promising hand to lose, or instead of winning straight out the pot is split between players.

The researchers used slot machines to replicate just that.  They offered players selections between a multi-line slot machine (MLM) and a single-line machine (SLM).  The payout remained the same for a ‘win,’ however ‘winning’ on the multi-line machine required a greater investment to play.  Despite lower profit margins, participants elected to play MLMs a staggering 94% more often (Sharman 2).  What’s more, when they measured neurological responses to LDWs, responses were similar or greater than those measured following full wins.

Interestingly, they believe the ‘near-miss’ phenomenon, described in the third cherry example, explains the endurance of the gambling behavior.  They found that the wheel combination that resulted in a near-miss was significant, in example (XXO, XOX, or OXX…).  When a near-miss occurred as a result of the last wheel falling just short of a match players were more likely to continue play in hopes of ‘repairing the loss’ (Sharman 2).  Conversely, the responses measured in players that won at a greater rate displayed a tolerance response, which reinforces the notion that reward delay enhances the neurological response to the reward.

Though the rate of winning is admittedly low for casino goers, it seems that their behavior makes sense neurologically.  The thrill of the potential win has been studied with risk-taking in mind.  It is from this phenomenon that we get sayings such as “With great risk comes great reward.”  Humans are genetically predisposed to risk taking, and Casinos do a great job of capitalizing on this.