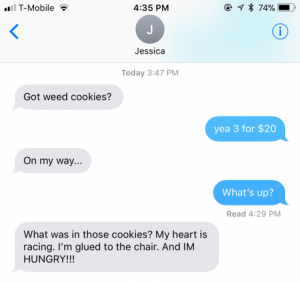 Like Jessica, you may have experienced marijuana-induced euphoria and “munchies,” or have heard about someone who has. It is popular belief that THC, the chemical component of cannabis responsible for its “high,” has no long-term negative effects on the body. In fact, cannabis is widely considered as a safe, non-addictive drug with calming effects and medical benefits. Unfortunately, this type of reasoning has led to the support of marijuana legalization while its full effects are still being explored. Research has already shown that marijuana impairs learning, memory, and decision-making, slows down reaction times, and causes paranoia, psychosis, and hallucinations. It is also the most commonly used illicit drug in the U.S., being consumed by 11 million young adults ages 18-25 in 2015.2 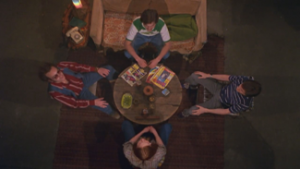 Have you ever wondered whether weed is, in fact, harmless? A recent study published by Jodi Gilman may make you think twice before you ‘take the hit’.

Subjects who smoked marijuana displayed structural abnormalities, larger volumes, and deformed shapes of their nucleus accumbens and amygdala in comparison to those who did not. These differences correlated with the number of joints smoked per session and the number of smoking sessions per day; as the amount of marijuana consumed increased, so did the extent of these changes.

This study counters the misconception that marijuana has no permanent or deleterious effects. More importantly, in contrast to popular belief, it shows that THC causes physical changes in regions of the brain that increase craving for and motivation to use the drug, despite being taken in small amounts.

You might be wondering what the implication of these results is and how deciding to smoke weed (even recreationally) puts you at risk.

These results have concerning implications not just for individuals who use marijuana heavily, but also for those who use it recreationally. Since these changes were found to be dependent on the dose of marijuana consumed, each exposure can then be expected to have a greater impact on the nucleus accumbens and amygdala of users’ brains and thus, on users’ behavior related to the acquisition and use of the drug. It is therefore important to raise caution about marijuana use as continual consumption of it can increase the risk of addiction.