Have you ever hoped that scientists would figure out what underlies monogamy? If so, your calls have been answered by an unexpected source: the prairie vole. These cute rodents are used in this investigation for two reasons—they establish long-term partners, and they also display aggression against other potential mates once their monogamous partnership is established. Researchers searched these rodents’ bra 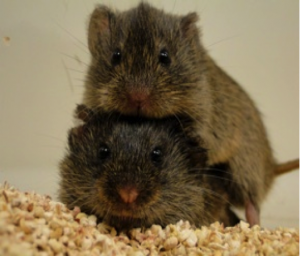 ins for structures mediating these two aspects of pair bonding, the term used for animal’s monogamous behaviors. They began by investigating neuronal communication in an area involved in approach and avoidance behaviors, the nucleus accumbens (NAcc).

The neurotransmitter Dopamine can activate many receptor types, and the receptor activated determines dopamine’s effect. Knowing already that activating D2-receptors promotes partner preference, or preference for a specific mate, the researchers investigated if D1-receptors also contributed. By injecting a D1-activating chemical into the NAcc before mating, the researchers blocked partner preference development. This occurred even if they simultaneously activated D2-receptors, showing that D1-receptor activation is powerful enough to overcome D2-receptor promoted monogamy.

Next, they compared D1/D2-receptor quantities in the NAccs of single versus monogamous males. There were no differences in D2-receptor levels, but males that had been monogamous for two weeks had more D1-receptors throughout the NAcc than single males. Additionally, this increase in D1-receptors wasn’t observed after the first 24 hours of partner formation. The researchers therefore concluded that NAcc D1-receptors aren’t involved in initially triggering partner preferences, but are responsible for sustaining long-term monogamous partnerships.

Just like how some people are habitual monogamists while others avidly avoid commitment, some vole species are non-monogamous. The scientists examined these voles’ NAccs and found more D1-receptors, possibly accounting for their inhibited pair bonding. Blocking these D1-receptors increased displays of intimacy, but didn’t reinstate partnership formation. This showed that D1-Receptor quantity couldn’t fully account for species differences in mating behavior, so scientists must continue searching for the missing pieces of the puzzle to fully explain monogamy.

The researchers note that the regions involved in pair preference are also reward-processing areas, and that the observed D1/D2-receptor opposition parallels the regulation of drug-seeking behaviors in the NAcc. Is it possible that the brain mechanisms meant to regulate social bonding are what abused drugs target? Another feature of drug addiction is motivation for rewards that don’t cause much pleasure—could this explain why monogamous relationships endure even when the “sparks” of the initial relationship dissipate? Interestingly, they also found that 28% of voles didn’t show D1-receptor elevation after becoming monogamous, and therefore could initiate a second pair bonding. Could this help us understand why some people fail in monogamous relationships while others thrive? Future studies will determine whether voles are really the key to solving our relationship problems.