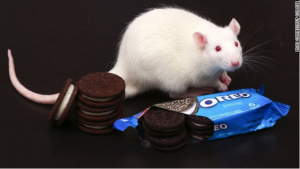 Do you ever feel like you just can’t put down that bag of cookies or piece of cake? Well it might not be your fault. We all love having a sweet treat every now and then, but what happens when sugar becomes part of our everyday diet? A recent study conducted by researchers at Princeton University (Rada, Avena, & Hoebel, 2005) suggests that daily binges of sugar could actually have a similar effect on our brains to drugs of abuse!

Past research has shown that sugar can be an addictive substance, but does how much you eat and how often you eat it matter? We all know that eating large amounts of sugar everyday may not be the healthiest choice, but according to new findings, sugar may actually be abused like a drug. Most people choose to avoid drugs like cocaine and heroine because they are addictive and are known to negatively impact our brains, but what about sugar? According to Dr. Avena, one of the authors of the study, “repeated sugar bingeing might actually change our brains in a similar way drugs of abuse do.”*

A key sign of drug abuse is that drugs increase the amount of dopamine in our brains with each use. Dopamine is a neurotransmitter that plays a role in motivation. Unlike drugs, over time the amount of dopamine released from consuming a food is reduced. This effectively decreases the motivation that we have for that particular food (Avena, Long, & Hoebel, 2005). However, binging on sugar actually increases dopamine levels in our brain, making us highly motivated to eat even more of it.

With the excess of sugary processed foods in our grocery stores and on our plates, what does this mean for our waistlines and more importantly for our brains? Previous experiments have shown that under certain conditions, intensely sugary foods can cause signs of addiction (Avena, Rada, & Hoebel, 2008). Studies have even shown that the reward of sugar is actually preferred over that of the infamously addictive substance, cocaine (Lenoir et. al., 2007).

The 2005 Princeton study gave rats unlimited access to sugar for a set amount of time everyday. Researchers found that these rats show similar brain activity to rats addicted to drugs. Not only did they consume more and more sugar each day, their dopamine levels remained high instead of decreasing over time. The study went even further to say that rats who binge on sugar daily may even lack the response of the neurotransmitter, Acetylcholine, which helps our brains to recognize when we are full.

So what does this mean for us? Some people may actually be dependent on or even addicted to sugar, a bad sign for our obesity problem. A national movement away from sugar-laden processed foods could be key in tackling our obesity problem, starting with awareness of the reality of sugar addiction. Next time you reach for a sugary donut at the office or pick up a soda, think about how it might be affecting not only your weight, but also your brain.

Kathy Luong, student in class. 2 major edits (1. Cut down on specifics from the study, 2. Made it sound catchier)