Lights flash and a song plays as you collect your winnings at a slot machine. The machine is possibly tricking you into thinking you’ve won by having the lights flash, even when you lose though. Surely you’d notice this trick? A study conducted by Mike J. Dixon et al., published in the November 2014 issue of Addiction, explains how we fail to recognize this trick.

The study examined if participants preferred playing single or multi-line slots. Single line slots provide a win if the symbols straight across match, as pictured below (left). Multi-line slots operate on the same concept, however you can win by matching symbols in a larger variety of patterns rather than simply straight across, as shown below (right). 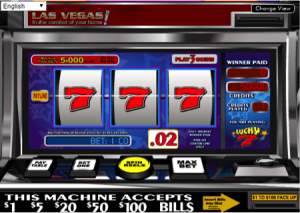 Participants played 250 spins on each machine and were then asked which one they enjoyed more and which gave a larger payout. Both games have similar payouts and “true win” percentages. A “true win” is when you earn more money than you gamble. Since multi-line machines are more likely to match symbols, they will light up and provide money more frequently. If you bet 20 tokens and win 10 back, the machine will light up as though you’ve won, even th 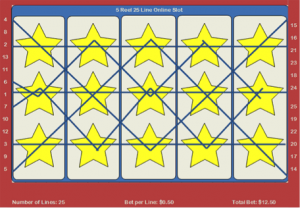 ough you’ve lost 10 tokens. Outcomes like this are classified as “losses disguised as wins (LDW)”. This means multi-line games reduce the apparent length of losing streaks. Thus the number of actual wins are overestimated when playing a multi-line game, due to some LDW being counted as true wins by players.

The increase in apparent win frequency increases both the player’s sense of pleasure and skill, especially in frequent gamblers. Out of the 250 spins, players estimated that they won 46 times in single line games and 60 times in multi-line games. The actual number of wins was 45 on both machines, with players winning 92% of their money back. Since the multi-line game is subject to LDW, it’s seen to provide a higher payout and be a safer option to players, due to shorter losing streaks. This idea is further examined by Shu Li (2008) in Preference Reversal: A New Look At An Old Problem. Li states that given a choice, people will choose a less risky bet, the multi-line slots in this case. It would be interesting to see if a similar result occurs in other casino games such as blackjack. For instance, if another player wins at your table, will this cause you to overestimate your own wins and feel that your luck has changed? The fact that players feel that they win more frequently is also examined by Juemin Xu (2014), in Cognition. In games where players control the risk associated with their bet, they tend to win more frequently after winning, since they make a safer bet in the next round, creating the sense of a hot hand.

In summary, even though you may feel as though you’re in control, and can outsmart a casino, this is just an illusion to make you spend more money.