If the pleasure you obtained from snacks had a shelf life, would you reconsider how much of a certain food you eat? The tale presented here chronicles the life of a mouse named Morty who deals with this very dilemma. Morty lived in the realm of “The Test Group”, where residents picked between two predetermined choices like citizens in a dystopian state. He had it better than other mice though; they lived in the land of “The Control” where choice was but a dream. 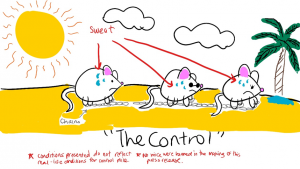 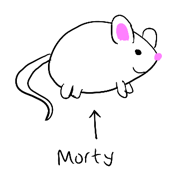 Morty’s life defining choice consisted of picking between water and sugar water.  After a few sips of water, Morty couldn’t help but try the mysterious bottle labeled, “5% Sucrose.”  Like a teenage girl shopping in a back to school clothing sale, Morty couldn’t stop. He drank until he could drink no more, and just like that, the bottle disappeared. 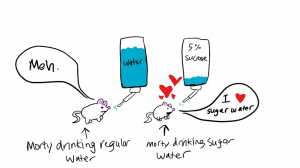 Life went on, and Morty grew up. But one day, a gloved hand returned with a drink. Could it be? The holy sugar water? Nope, just water. After several imposter drinks, Morty was ready to give up. One more solution came, and a memory was triggered, “This is it!” But something was wrong. Its magic was gone. Where was the euphoria? The researcher took note of Morty’s frown. Morty reminisced to the good old days where all he needed was his liquid gold to make him happy. Another solution came. It was sweet, but seemed fake. Morty pondered: “Why am I not getting the same euphoria from the sugar water or even the different sweet tasting one?”  Before he could answer that question, his vision faded to black. 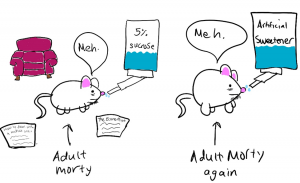 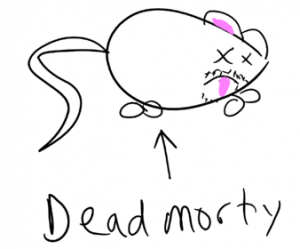 Unfortunately, this was the end of Morty’s story; but his passing was not in vain. Shortly thereafter, “The Test Group” brains were studied to reveal a significant finding.  In these brains, a circuit involved in processing pleasure for sweet tastes was found to have significantly reduced activity than in the control group.  This pleasure circuit was the only region of the mice brains that showed reduced activity in the test group compared to the control, further supporting the idea that their impaired brain activity limited their ability to perceive pleasure. Sadly, the saying, “Too much of a good thing is a bad thing” proved to be true.

So, what does this mean for humans? As rates of consumption of sweet food and drinks increase among adolescents (Guthrie & Morton, 2000; Wang et al., 2008; Lustig et al., 2012), we can begin to trace the connection between repeated pleasure stimulation and reward related diseases like obesity. As shown in Morty’s case, repeated pleasure stimulation provided by food during adolescence can completely alter our ability to process the pleasure. This raises a new series of questions regarding behavior that can lead to obesity. Is overeating simply an attempt to recreate a nostalgic sense of pleasure? If so, how could this explain obese children? Or is overeating a byproduct of a medley of factors regardless of pleasure? Simply put, would you drink soda if it didn’t make you happy? 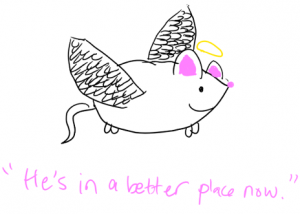