Time and time again, it seems our brains 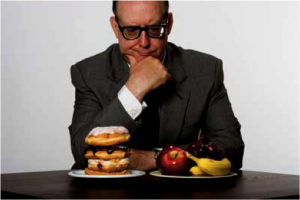 are determined to undermine our best efforts to maintain healthy eating habits. Most of us are all too familiar with the feeling of regret that follows caving into food cravings that were ultimately too strong to resist. More often than not, the foods we reach for when cravings strike are rarely wholesome and nutritious but rather laden with processed sugars and saturated fats. So how is it that the foods our brains crave the most tend to be the foods our bodies need the least?

Research has shown that our food choices are largely dependent upon learned experiences, which influence our eating habits at both conscious and subconscious levels.

While most people are well aware of their cravings for sugary or salty foods, other inclinations are far less obvious. A recent neuropsychological study suggests our brains show preference for calorically dense foods, meaning foods with the greatest average calories by weight. This preference was revealed through the behavior and brain scans of 29 healthy research subjects in a study conducted by researchers at McGill University.

Participants were first shown photos of 50 different foods and asked to rank the food items in terms of their liking for the items and the amount of calories they thought each item contained. Participants then partook in a sort of food auction, in which they were allowed to place a monetary bid (between $0 and $5) on each of the 50 food items they had previously ranked. A fMRI scanner was used during the auction to see how brain activity corresponded to auction bids.

If perceived caloric content and conscious liking played no role, what drove participants to consistently place greater bids on foods with high caloric density? Activity in brain areas that assign value to foods suggests that the brain deems calorically dense foods more rewarding. In other words, we are wired to seek out higher calorie foods, the vast majority of which are high in processed sugars and saturated fats.

For those of us with access to an abundance of calorically dense foods, such a predisposition can be problematic. With obesity rates on the rise, it is more important than ever that we improve our understanding of the factors that influence food choices. After all, we can not begin to overcome a problem with out first identifying its source. As complex as the obesity epidemic may be, better understanding what drives us to eat the way we eat is one of the best ways in which we can move toward finding effective solutions.