An opioid epidemic and a food epidemic are wreaking havoc. Obesity rates and death by opioid overdose are at the highest they have ever been.[1] A study conducted by Schulte et al. proposes that the mechanisms behind food addiction and drug addiction have similarities. The implications of this finding are that highly processed foods can potentially be affecting our brains in a similar way that drugs do. 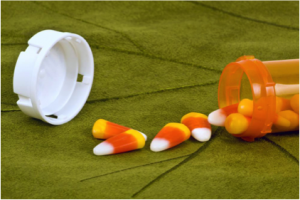 Highly processed foods are foods that have been manipulated by humans so that they have added amounts of refined carbohydrates, such as sugar and white flour, and/or fat stored in the foods. Processing foods increases their abuse potential by making them more rewarding. The increase in reward value is problematic because of the negative consequences these foods have on our health, like high blood pressure and binge eating. In the Schulte et al. study, highly processed foods were more likely to cause addictive-like eating behaviors by increasing the rewarding value of the food and thereby increasing motivation to seek those unhealthy foods despite both negative consequences to one’s health and efforts to cut back. These behavioral characteristics are shared with other addictive disorders such as drug addiction.

Similarly to drugs, these addictive foods change how dopamine – a chemical that responds to rewards – is working in your brain. By increasing the dopamine released when you eat these foods, the food becomes more wanted through heightening its motivational and rewarding value. Highly processing foods increases the food’s absorption rate into your bloodstream, which drastically deviates your system from its ideal level in homeostasis. This deviation is what is responsible for a ‘sugar rush’ that you may feel when eating very sugary foods. In addition, highly processing foods may cause a tolerance to be developed meaning you require more food in order to feel full. Glycemic load, GL, is a measure of blood sugar spike that also accounts for the dose in grams of refined carbohydrates. The GL measure is particularly effective because it shows which foods cause a large increase in blood sugar levels. In foods with a low GL, the glucose is gradually distributed into your bloodstream, which reduces energy crashes and carbohydrate cravings – symptoms of withdrawal, which can occur upon abrupt discontinuation of a substance upon which an individual has become dependent. 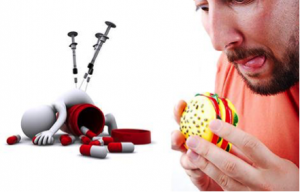 The purpose of the Schulte et al. studies was to identify a profile for the specific foods that might put people at risk for food addiction. In the first study, researchers found that highly processed foods were most closely related with behavioral indicators of addictive-like eating, such as the inability to stop eating once full. In the second part of the study, fat content and GL were identified as large predictors of problematic addictive-like eating behaviors. This study could have some tremendous implications on food policy and public health education. To avoid developing food addiction, one might be weary of processed foods with high fat content and glycemic load until more research has been conducted.

What Food Addiction and Drug Addiction Have in Common. (2016, November 17). Retrieved March 10, 2017, from http://www.lifestylebyte.com/what-food-addiction-and-drug-addiction-have-in-common/