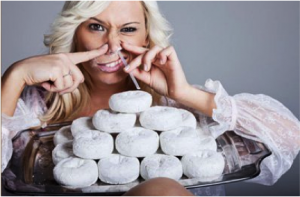 Imagine that a plate of freshly baked brownies is placed in front of you. You’re not particularly hungry, but the temptation to eat the sweets is too powerful to resist, and it’s not long before the plate is almost empty. You think to yourself, “man, these things are addicting!” While you probably weren’t referring to addiction in its literal sense, your statement may actually hold some truth. In fact, research shows that sugary foods can have similar effects on the brain as certain drugs of abuse.

During consumption of both drugs and tasty foods, a substance known as dopamine is released into the brain. A recent study published in Neuroscience (2005) attempts to investigate whether the actual patterns of this dopamine release are the same in both situations. This can be hard to test because we don’t normally eat in the same compulsive way that addicts take drugs. But by simulating eating habits that more closely resemble the obsessive manner of substance abuse, the two can be compared more easily. Using this method, Pedro Rada and colleagues found similar dopamine patterns for drugs and sugar.

To produce these addiction-like eating habits, Rada modeled binge-eating behavior in rats. Binge eating occurs when a large amount of food, or sugar in this case, is consumed in a short period of time. In rats, binge eating can be seen after periods of extreme hunger. To induce this type of diet, rats were repeatedly given 12 hours of access to both regular rat chow and a tasty sugar solution followed by 12 hours of no food.

They found that compared to a control group with 24-hour access to food, the limited-access rats showed a larger increase in sugar intake between the first and twenty-first days. This trend was especially prevalent during the first hour of access, demonstrating that the condition successfully produced binge-eating behavior. More importantly, the rats also showed an increase in dopamine release that continued through the entire 21 days of the study. In another group of rats, the same intermittent access was given with only chow. But without the palatable sugar solution, there was not the same level of increase in food intake or dopamine release over time. This suggests that food must be very sugary for intermittent access to induce addiction-like eating.

So what does it all mean? The results of this study demonstrate that binge-eating sugary foods and taking addictive drugs can affect the brain in a similar way. This finding has major implications for understanding obesity, especially when binge eating is involved. It suggests that extreme weight gain could be the result of addiction rather than behavioral flaws, such as a lack of self-control. Furthermore, it appears that the danger for binge-related obesity lies primarily with sugary foods, as chow alone did not produce addiction-like qualities. However, it is important to remember that dopamine is only a small piece of the picture. A similarity in the release of one chemical only suggests that two systems are related, not identical.

174 thoughts on “Addicted to Sugar: How Eating Sweets Compares to Drug Abuse”