You are more likely to binge on foods that are bad for you. This probably isn’t a surprise since pretty much no one thinks of celery when they think of binge eating. When you settle in for a night of Netflix and yoga pants you don’t reach for a glass of water and some carrots. It has already been found that the brain activity associated with addictive eating is similar to that of drug dependence (Gearhardt 2011), but why can’t we addictively eat something healthy? A study from the University of Michigan and the New York Obesity Research Center sought to explain why. 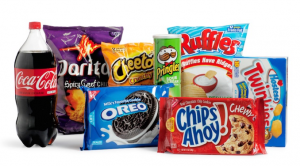 UofM and the NYOR conducted surveys in which participants either compared two foods and chose the one they were more likely to overeat (to come up with an overall ranking) or were asked to rate foods’ addictiveness. Chocolate, ice cream, pizza, chips, French fires, all of which are considered highly processed, won both surveys (if being deemed most problematic can be considered winning) (Schulte 2015).

Two of the things we do to a substance when we process it into a drug are increase the dose of the addictive agent and increase the rate at which that addictive agent is absorbed into the bloodstream. Processing in foods can do the same thing. The addition of fat or refined carbohydrates increases the dose and raises the food’s glycemic load, which measures the spike in blood sugar when a food is consumed. The sugar in highly processed foods is absorbed into your blood faster than the sugar in natural foods. This is in part because highly processed foods often lack sufficient fiber, protein, and water, all of which can slow down the absorption rate of refined carbohydrates (Schulte 2015).

Bingeing on chocolate ice cream may not result in the same symptoms as snorting cocaine, but it can still be addictive. If you avoid highly processed foods not only will you reap the health benefits that come with eating right, you may also find yourself eating less. That seems like a really simple solution that everyone trying to not overeat should listen to… but then again Oreos, so your choice.

Schulte EM, Avena NM, Gearhardt AN. 2015. Which Foods May Be Addictive? The Roles of Processing, Fat Content, and Glycemic Load. PLoS ONE 10(2)