How does the brain respond when we eat? 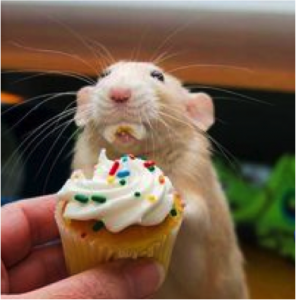 Can we become addicted to food? We all know it can be hard to stop eating the entire pint of ice cream—but does this really qualify as true addiction? Recent research into the brain’s response to binge eating in mice suggests this may be the case.

Obesity has become a major health crisis in recent years, where currently 2 in 3 American adults and 1 in 3 children are considered overweight or obese (National Institute of Health, 2015). There has also been an increase in related health problems including higher rates of type 2 diabetes, heart disease and high blood pressure (National Institute of Health, 2015). These alarming trends have put a renewed focus on research into elucidating the mechanisms involved in food consumption and disordered eating in an attempt to figure out what is leading to this alarming epidemic of obesity in the US. 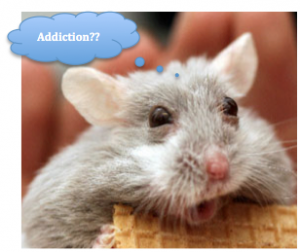 In recent research published in Neuroscience, researchers have found that binge eating in rats produces similarities in the brain’s response and behaviors that are seen in human drug addicts. Dopamine is the primary chemical involved in motivation in the brain and has consistently been shown to be involved in drug addiction (Hoebel et. al, 1999). The dopamine released in the area of the brain known as the Nucleus Accumbens seems to be the major source of motivated behavior.

By creating an Intermittent Access Model, where the rats were only allowed to eat the sugary food pellets at a certain time, the experiment led the rats to binge eat the pellets, mimicking drug taking behavior in humans. In addition to the binge eating, the rats ate more and more each time the pellets were offered, modeling another addictive behavior: escalation. Similar to the brains of people on drugs, levels of dopamine rose in the brains of the rats while eating the sugar pellets. Acetylcholine (ACh), another chemical in the brain was also found to be involved. ACh is the neurotransmitter that controls the satiation response; the signal that tells you to stop eating. The signal was delayed in the binging mice, suggesting that disruption of this signal could also play an important roll in disordered eating and potentially food addiction.

This research shows a clear connection between the response to binge eating sugary treats and the brains response to drugs. Dr. Hoebel commented on the recent research saying “It is important to determine how binge eating is different from normal food intake to determine how eating schedule may lead to food addiction”*. This probably doesn’t come as much of a surprise to people because deciding not to eat a whole box of chocolates can be a daily struggle for some. Future research will continue to clarify the connection between drug addiction and food intake to better understand its relationship to obesity and disordered eating.

Adela Fine (Roommate, took the class last semester)- Suggested changing the wording of the title and adding a quote.