Ever walk past a corner store with your friends and feel the sudden urge to take a risk and buy scratch off tickets just for fun? You get your tickets and anxiously scratch off the opaque covering, revealing how much you’ve just earned. Your friends laugh, shrugging off the disappointing five cents they’ve just won, but your ticket reveals a gleaming five whole dollars!! You grin ear-to-ear with victory. Out of you and your friends, who do you think is more likely to risk buying another ticket? Researchers (and most likely your friends too) would predict YOU!

It is commonly assumed that when people are making decisions under uncertainty, they stay away from risky behavior and choose the safest option. It’s called “fight or flight,” and as humans, we typically choose flight! In a recent study by Ludvig et al., researchers determined that the memories we retrieve at a decision-making time could possibly play a large role in how risky we choose to be. In order to test this hypothesis, researchers developed a basic “risky-choice task” to see if memories of past outcomes could determine future choices.

The simple task involved four total options for the participants to choose from. Three of the “safe” options always resulted in either a significant or insignificant reward of 0, 40, or 80 points and the fourth “risky” option led to a 50/50 chance of gaining either 20 or 60 points.

The experiment was comprised of five types of trials, making sure that the participants grew accustomed to the reward system and overall flow of the game. The final trials of this experiment were “primed decision trials,” trials aimed to see once and for all if our memory of past wins or losses could dictate our future decision-making! In order to do this, researchers used cues that were previously matched with a participant’s past outcome of receiving a small reward (loss) or large reward (win!).

Just as expected, those who remembered receiving the large 60 points reward during the risky 50/50 chance decision were 15% more risk seeking when making their next move! What these results prove is that reminders of past wins, or even simple cues, can create memory biases, showing how we may have the tendency to remember more intense outcomes in the exact moment of attempting to make a decision. For instance, since you won that big $5 bill last time you bought a scratch off ticket, the next time someone suggests buying a lotto ticket, you may feel just that much more inclined, particularly if you happen to see a crisp $5 bill lying around! 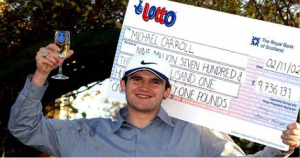 “We’re humans, we like the feeling of success!”* said Professor Ludvig. And that we do! As the research shows, even just a faint remembrance of a past win can enhance our risky behavior. However, Ludvig warns, “But don’t let your past success fool you. Just because we win once doesn’t mean we’ll win again. And that’s where people start to get in trouble…”*