You run to class without eating anything early in the morning. You try to concentrate but can’t stop feeling your growling stomach. You keep checking the time and can’t wait to 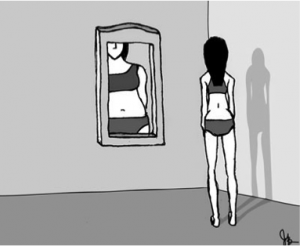 get something to eat. Certainly, many people have once experienced this urgency for food. When we are hungry, we wish to get the food immediately. However, not all people experience this healthy relationship with food. What will a person with anorexia nervosa be like in the same situation?

People who have anorexia nervosa (AN) maintain a distorted idea of their body weight and body image and don’t always find food rewarding. They limit their diet, but how can they bear the uncomfortable feeling of hunger that people normally feel? Because hunger promotes a sensitivity to food for most of people but not for those people with AN. A study conducted at the University of California, San Diego demonstrates that women recovered from AN tend to wait a longer time before getting food when hungry. Researchers used delay discounting monetary decision task that tests how long people can wait for an increasing amount of money to compared women recovered from AN with healthy comparison women. Since the amount of money increases with waiting time, it can reveal people’s choices of an immediate reward or delayed reward and controlled decision making. Meanwhile, an appropriate brain scan revealed results when people are hungry or full in doing the task. The results matched perfectly with researchers’ expectation.

The RAN group showed little difference in time taking to make decisions between feeling hungry and full, indicating they don’t respond to hunger immediately. It explains the reason why with the same situation people with AN can sit patiently in the classroom and don’t find the motivation for food. They don’t appreciate the immediate reward but would rather wait for the future reward of being thin. Correspondingly, the areas in the brain for the RAN group didn’t reflect a significant difference between hungry and full, suggesting that these areas were less sensitive to physical needs. Whenever dealing the signal of reward, the RAN group always showed an increased cognitive control regardless of hunger or .

Our physical state naturally does a good job reflecting our intensity for food, but not for people with AN. A variety of problems drag the reward system to breakdown, such as abnormal neurological mechanisms and distorted connections between different parts of the brain. Most importantly, long-term self-control and an unhealthy psychological state can lead to successful food restriction in people with anorexia nervosa.

Sitting impatiently in a classroom and feeling an urgency to get food is not helpful to concentrate, but it is probably a good sign that indicates our functioning physical state. Future treatments should work on bringing back this urgency to people with Anorexia Nervosa.