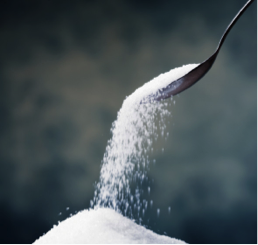 In a society where a king-size candy bar can be bought cheaply at almost any corner, overconsumption of sugar seems almost unavoidable, yet this was not always the case. With the expanding ease of access to sugary foods in recent years, America and other developed nations across the globe have seen their population plagued by obesity. Are we addicted to sugar?

A recent study out of the University of Bordeaux in France by Lenoir et al suggests that sugar can be even more addictive than many hard drugs. Rats were given the choice between a non-caloric saccharin (sweetener) solution and cocaine injections. Sweet wins hands down. “Interestingly, sugar even wins for rats that display signs of cocaine addiction,”* says Serge H. Ahmed, one of the researchers. Rats without addictive behaviors towards cocaine chose sugar, but this preference remained evident in rats that were sensitized to cocaine. Sensitization, seen commonly in cocaine addiction, is when the same dose causes increased drug effects and motivation for the drug. The motivation towards sugar even outweighs an addiction to cocaine!

Does this motivation last if it takes more work to get the sugar? Increased work often means we feel significantly less motivated to go for something. Surprisingly, rats still preferred sugar when the amount of work needed to attain it increased. In contrast, if you give us a higher reward for the same work, our motivation will increase. However, raising the available cocaine dose did not switch the rats’ preference away from sugar. Ahmed states that “Even if the reward is increased, and the amount of work needed for cocaine is relatively less than sugar, sugar still remains the winner. Sugar clearly has some high value for these rats!”* The addictive nature of cocaine cannot seem to outmatch our desire for sweetness. Rats that had been exposed to cocaine for long amounts of time (6 hours daily for 3 weeks) still changed their preference to sugar. Even when rats were binging on cocaine only an hour prior, sugar was still the clear choice.

These findings suggest that not only does sugar have the potential to be addictive, but that its reward can outweigh even hard drugs. Could this then explain the obesity epidemic sweeping the nation? Rats, and perhaps people, not only prefer sugar, but are motivated to attain it, even when more work is needed or there are other addictive options. This higher motivation despite obstacles suggests that perhaps sugar does potentially have an addictive nature, as similar motivational tendencies are seen in drug addiction. This may seem like the long-awaited answer to the obesity problem, but this is only part of the equation. Although this is not fully understood, researchers suggest that sugary taste receptors are being consistently overused due to our high sugar diet. This then overrides our brains that are telling us we have enough sugar, and the prevention of that sugar inhibition is on the verge of addiction, an addiction that is enabled by every king-sized candy bar.