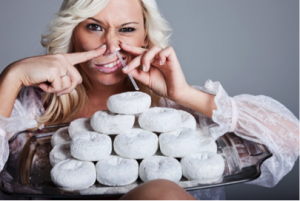 You may have heard of people being addicted to drugs, what about food? Might food have the same addiction potential as drugs? If you’re guilty of helping yourself to a fifth slice of cake or if your thoughts constantly revolve around that tub of ice cream – this could be a sign. All drugs of abuse activate the reward system but to varying degrees. Coca leaves have rewarding properties and were used for medicinal purposes, yet they did not elicit addiction. Cocaine, a refined form of coca leaves, results from processing and produces a more potent stimulant and this potency makes it addictive. Similarly, all foods activate the reward system but not all foods evoke an equal response; highly processed foods share characteristics with drugs that are “processed” and are associated with food addiction.

Highly processed foods, foods with added fat and refined carbohydrates, are most frequently associated with addictive-like eating behaviors. This was concluded based on a survey given to participants that identified those who endorsed symptoms of food addiction. Not only does the amount of refined carbohydrates matter, but also how quickly the carbohydrates enter your system. The technical term for this is Glycemic Load (GL), a measure of how big a blood sugar spike is and the rate of absorption.

In a study recently conducted, researchers put this 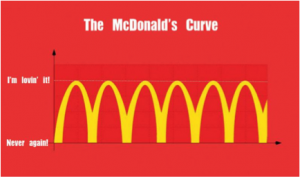 to the test. Participants in this study were given a task: to choose between two foods. They were told to select which food they thought would be most likely to lead to addiction or other problematic eating behaviors. The more highly processed of the two foods was chosen consistently. Based on these results, researchers found that the amount of processing appeared to be an influential characteristic in predicting problematic eating behavior.

Once certain foods were identified as problematic, researchers examined what these foods had in common. Foods with higher GL may be capable of triggering addictive-like behaviors, such as constant cravings at inappropriate times, due to its high levels of reward. Similar to addictive substances, this is a result of excessive release of dopamine, a neurotransmitter involved in motivation and reward. One reason addicts continue to take drugs is the desire for the high, the rush. In the same way with regards to food, GL is this rush. These processed foods are perceived as highly rewarding, and can lead to compulsively consuming additional highly processed foods despite harm to one’s health. There might yet be some truth behind McDonald’s’ greasy, fatty, and highly processed foods notoriously luring individuals back time and time again. Researchers determined that highly processed foods share properties with drugs of abuse like, concentrated dose and rapid rate of absorption. In foods, this is synonymous to the addition of fat and/or refined carbohydrates, and how fast refined carbohydrates are absorbed into your system.

If you find yourself seduced by unhealthy foods, ask yourself if you need it and stay clear of those beguiling golden arches. Keep in mind that what you’re consuming may actually be consuming you.