Have you ever been watching Television and gotten the urge to grab an unhealthy snack during the commercial break? Has it ever happened because the commercial you saw was for a high fat, sugary, scrumptious looking snack, with gleeful people having tremendous fun in it? Most people will answer “yes” to those questions and more often than not, it was the ad that made them want the snack, even if they weren’t hungry to begin with. Most of the food advertisements seen on television today exhibit unhealthy food in extremely positive situations, leading to the increase in desire and consumption for these snacks. 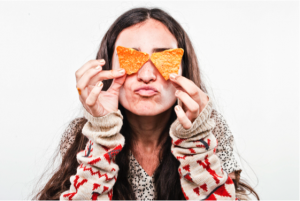 This concept is explored in Harris, Bragh and Brownell’s study. The researchers define advertisements as real world primes – something that when exposed to, subconsciously creates a response to something related. For example, holding a warm drink (the prime) can cause people to perceive a stranger as warm (caring); the warmth triggered the warmth.[1] Priming occurs quite frequently and naturally, in adults it can cause imitation or mimicry and it can be used to help children while learning. Priming influences can also have negative effects on behaviour; dangerous products such as cigarettes and alcohol can be made to look positive and with regard to food, priming can make people desire food even if they are full.

In this case it was predicted that watching advertisements for unhealthy snack foods would prime people to eating larger amounts of said snacks. This phenomenon could be contributing to the recent obesity crisis, which is becoming more dangerous and apparent in younger populations.

By examining how many “Goldfish” crackers were eaten by children who were primed with junk food advertisements vs. those who saw ads unrelated to food, the researchers discovered that the children exposed to food ads ate almost 9 extra grams, a significant amount in the research.

The experimenters took these results a step further when looking at adults: those who saw ads pertaining to junk food ate almost double the amount and for longer than those who didn’t, regardless of the type of food they ate (unhealthy snacks, healthy snacks or those moderately healthy). The primes were even powerful enough to cause restrained eaters to eat more than usual.

The adult population did however reveal a silver lining. Those who were primed with advertisements for healthy snacks ended up eating the least out of all the groups, but it did not affect the type of food consumed. 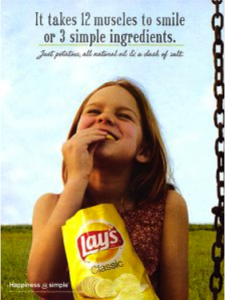 Advertisements play an important role in today’s society. They don’t just affect our brand preferences but also encourage intake. Ads for snack foods promote fun and happiness causing viewers to associate the food with those feelings. Unfortunately this has potentially bad consequences, especially for children, and could contribute to rising rates of obesity and unhealthy eating. The researchers did however conclude their paper on an optimistic note; they argued that being aware of the unwanted influences of ads, might allow us to consciously prevent their effects on us.