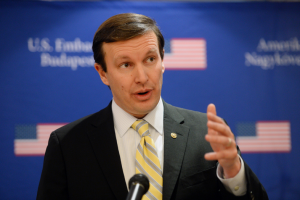 WASHINGTON—Senator Murphy unveiled his proposal to increase funding for anorexia research in a speech on the Senate floor this Friday.  The money—$1.6 billion—would be added to the budget.

In his speech, Senator Murphy described the funding as a “critical first step”* in fighting a disease that has “robbed too many young people of their happiness, their health, and even their lives.”*

Murphy’s plan comes on the heels of a groundbreaking Australian study on anorexia.  In this experiment, researchers induced Activity Based Anorexia (ABA), a disorder similar to human anorexia, in rats.  They did so by giving rats limited access to food and unlimited access to exercise wheels.  As a result, the rats starved themselves nearly to death.

The implications of these findings caught the attention of the international science community.  If increasing activity in a specific brain circuit can ameliorate weight loss in ABA rats, could this same approach be applied to humans with anorexia?  The results indicate “yes.”

Since the study’s publication in April 2017, scientists have been working to gain the ear of Capitol Hill.  They found their champion in Murphy, the Connecticut Junior Senator who has prioritized mental health reform.  In December 2016, Murphy passed the bipartisan Mental Health Reform Act with Senator Cassidy of Louisiana. The Eating Disorder Coalition was one of the bill’s partners.

It therefore made sense that the Coalition would choose Murphy to turn the ABA study’s findings into policy.  Still, it was not an easy sell.  Congress had just passed the Anna Westin Act in 2015.  That bill focused on targeted prevention and treatment of eating disorders, an approach more attractive to members of Congress than research funding, which could take years to yield results.  Yet Murphy, who has become increasingly outspoken since Trump’s election, ultimately got on board.

“We have concrete evidence that reward processing plays a direct role in the development and persistence of anorexia,”* said Murphy in his speech on the Senate floor.  “We have a responsibility to act on this information.”*  Funding would help researchers isolate components of brain circuitry present in both ABA and human anorexia, providing information to help treat a currently incurable disease.

If Murphy’s funding proposal passes, it would represent a significant step forward in curing the .  Eating disorders are associated with higher health care costs, lower rates of employment and earnings, and lower quality of work.  Strong treatment and prevention strategies would yield .

Murphy’s proposal goes to the Senate floor in December.  The White House could not be reached for comment.