A recent study on drug addiction in rats gives insight into possible solutions for addiction in humans. A group of researchers at the National Institute on Drug Abuse in Baltimore, led by Dr. Billy Chen, have identified a brain region that appears to play a role in compulsive behavior related to drug seeking. Not only did they find deficits in this region in addicted rats, they were also able to change the rats’ behavior to reduce drug-seeking behavior. This has implications for the development of new therapies to help addicts change their behavior.

In 2013, Dr. Chen contributed to the understanding of the biological basis of addition by studying the activity of a specific brain region­¾ the prelimbic cortex (shown in Figure 1). To test the behavioral consequences of variations in activity of this region, their lab developed an addiction model in rats. The researchers allowed rats to have access to cocaine for several days before giving them shocks at the same time as the rats took the drug. Some rats will continue with the drug seeking behavior despite the shocks. These are the “shock resistant” rats whose behavior is compulsive, similar to human addicts. Other rats will stop seeking the drug when it is paired with a shock. These are the “shock sensitive” ones that do not portray addictive tendencies. They are more similar to those humans who may use cocaine recreationally, but do not seek out the drug compulsively. With this test, the researchers were able to separate the rats into groups of addicted and non-addicted rats. Both groups had exposure to cocaine, but like in humans, only some of them developed the unhealthy compulsive behavior to seek out the drug. 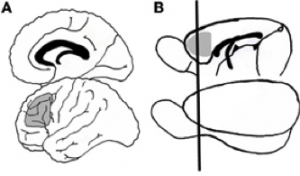 Figure 1. The shaded regions indicate the location of the prefrontal cortex in humans (A) and in rats (B) (Bizon, Foster, Alexander, & Glisky, 2012).

With these groups, Dr. Chen manipulated drug-seeking behavior by changing the activity of neurons in the prelimbic cortex. When the neurons that were previously underactive in addicted rats were over stimulated, these animals showed less compulsive behavior. In contrast, a stimulated decrease in activation of the neurons in the “shock sensitive” rats led to more drug seeking. These results suggest that lower activation of the prelimbic cortex correlates with drug seeking behavior when shocks are given at the same time as the consumption of the drug. Moreover, researchers are able to manipulate drug-seeking behavior in animals by changing the activity of neurons in this brain region.

This study adds to the understanding of the biological mechanism behind compulsive behavior and opens up possibilities for addiction treatment in humans. Developing brain stimulation therapies that increase activity in the prelimbic cortex has the potential to decrease compulsive drug-seeking behavior in addicts. The knowledge that there is a change in the brains of addicts is helpful not only in the development of a treatment, but also in the diminishment of the social stigma attached to drug addiction. With a general public aware of the difficulty an addicts faces in quitting, our society can better support them.