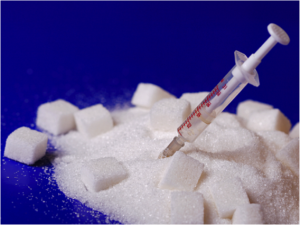 Would you rather have a bottle of Coca-Cola or a dose of cocaine?

According to a team of scientists from the University of Bordeaux, you’d likely choose the sugary drink. Their research suggests that refined sugars, such as sucrose and fructose, may surpass cocaine stimulation. This finding is surprising, since cocaine is one of the most harmful and addictive recreational drugs.

For their study, rats were given the choice between a sugary saccharin solution and an intravenous dose of cocaine. When rats with no initial preference for cocaine or saccharin were tested, they choose the sweetness over the drug without hesitation—as if cocaine was non-existent. In a series of follow up experiments, the researchers increased the appeal of cocaine and decreased the appeal of saccharin. Regardless of how the scientists manipulated the experiment, a large majority of the rats preferred saccharin instead of cocaine.

In addition, the scientists sought to determine how a history of drug use could influence the rat’s preference for the sweet solution. Rats with no previous involvement with saccharin were given long-term access to cocaine several days before beginning the experiment. Once these rats became addicted, they had the opportunity to select the saccharin solution or to fuel their addiction with a dose of cocaine. Most of the rats kicked their drug addiction and opted for the sugary solution.

How does this study change our perception of addiction?

If the world’s population were given unfettered access to cocaine, a portion of individuals would become drug addicts. In this study, 16% of rats demonstrated a steady preference for cocaine, despite having access to the saccharin solution. However, the vast majority of individuals would try a few doses of cocaine, but would ultimately pursue an alternative option—whether that be sweetness, or another other form of pleasure. If given the opportunity to take cocaine, we won’t all become hooked. Drug taking shouldn’t be feared as a direct path to addiction.

The tongues of most mammals, including rats and humans, contain receptors that respond to the sweet taste of sugary substances. Since these receptors evolved during ancestral eras, they respond best to primitive diets, which are free of artificial sweeteners. When saccharin is consumed, the sweetness hyper-stimulates receptors and causes an intense feeling of pleasure. Our taste receptors aren’t specialized for the intense sweetness of saccharin and it is this hyper-stimulation of the tongue that may cause saccharin to be more rewarding than cocaine.

What does this mean for your insatiable sweet tooth?