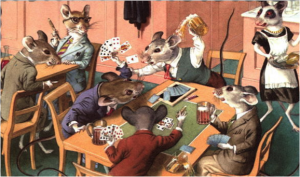 Have you ever visited your local casino to enjoy a few drinks with friends and maybe come home with a few extra bucks? A recent study highlights a correlation between alcohol consumption and risky decision making in gambling. Imagine this: Your friends spot a new game and decide to give it a shot. It seems simple; you pick one of three options, each corresponding with a different monetary reward ($2, $5, $50). If given the freedom to choose, you’d choose the fifty right? What if you received the $2 every time you selected this option, the $5 every other time, and the $50 once every thirty selections? Over the course of thirty trials, $60, $75, and $50 are the theoretical yields for the two-dollar, five-dollar, and fifty-dollar selection respectively. Clearly one of these options is the best, resulting in the most money going into your pocket. How do you suspect consumption of alcohol would change your decision? Would the riskier choice ($50) become more attractive?

A team of researchers at Utrecht University in the Netherlands explored this question by studying how alcohol exposure affects decision making in rats. In humans, alcohol use disorder(AUD) is linked with impulsivity and impaired decision making. Like us, rats are able to determine the best choice. In this study, the rat’s options (safe, optimal, and risky) were determined by the number of sugar pellets received. The amount of sugar pellets hold value to the rats, just as we value money. The selections for the rats also varied in the likelihood of receiving pellets and punishment time for the rat if no reward was granted. This study was then broken up further into two subgroups; one analyzing the effect of alcohol on performance and the other on the effect of alcohol when learning the outcomes for each option.

Analogous to the money situation described earlier, the rats demonstrated stable performance by selecting the optimal most often. However, when under the influence of alcohol, the amount of optimal choices were reduced. 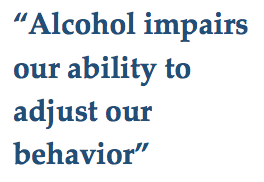 When treated with alcohol while learning the task, the rats were more inclined to choose the risky option. They became more willing to forgo the optimal and safe options in hopes of attaining a larger reward for that single trial. Non-alcohol treated animals reduced risky decision making over trials, whereas alcohol treated rats were less sensitive to punishment; Alcohol treated rats continued to choose the risky option, even after being penalized. After sobering up, the rat’s ability to make the optimal choice returns. This caused the researchers to suggest alcohol impairs our ability to adjust our behavior to feedback. Therefore, the development of alcohol use disorder in humans may hold ties to this impairment.