Do you believe in love? The monogamous prairie vole does! Researchers and closet romantics at the FSU psychology department analyzed the brains of these pair-bonding mammals in order 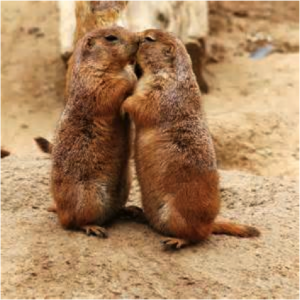 to determine how they form and maintain monogamous relationships.

With only 3-5% of mammalian species known to mate for life, the prairie vole represents quite the unique research opportunity. “Most of all,” chuckled lead investigator Brandon Aragona, “we hope to gain insight as to why many of us are single.”

Past studies have linked the prairie vole’s mating behavior to the nucleus accumbens (NAcc) (Liu and Wang, 2003), an important region in the brain’s reward system. Aragona’s team predicted that different subregions of the NAcc might control specific mating behaviors, so they gave male voles a ‘love drug’ called quinpirole and observed their interactions with females. Male voles with injections in the rostral shell of the NAcc increased contact with their love objects, while those with injections in the caudal shell just “weren’t feeling it that night.”

Aragona explained that quinpirole works by activating dopamine’s D2 receptors in the NAcc. His next goal was to identify the lesser-known role of NAcc D1 receptors, which can behave unlike D2. In fact, one study found that D1 activation does not induce the same romantic effects in prairie voles (Gingrich et al., 2000). Aragona’s team saw similar results when quinpirole-injected males lost interest in females after D1 activation, but grew excessively interested after D1 inhibition. Male voles probably have high NAcc D2 activity and low D1 activity during mating season.

But what happens after the honeymoon phase? Aragona and his colleagues hypothesized that a functional restructuring of the NAcc may allow male voles to reject new suitors as a relationship maintenance strategy. The researchers found that males with long-term partners showed aggressive behavior towards unfamiliar females and higher D1 activity on autoradiography tests. Inhibition of D1 blocked this selective aggression, suggesting that increased NAcc D1 activity may be a mechanism for relationship maintenance.

Perhaps all you need is love… and active nucleus accumbens D1 receptors?

Aragona claims otherwise, writing that the moderation of NAcc D1 receptors is “critical to the social organization and behavior of monogamous prairie voles.” His research cited that the more antisocial, non-monogamous meadow vole displays higher NAcc D1 activity than the prairie vole by nature. It seems prairie vole’s D1 receptors must remain in check after they form relationships so that their society may flourish.

Aragona’s study suggests that the differential functioning and plasticity of the NAcc dopamine system enables prairie voles to live in monogamous, social communities by regulating mating behavior. These findings reinforce the roles of both NAcc in reward processing and dopamine in motivating behavior, and confirm the dualistic relationship between NAcc D1 and D2 receptors previously identified in drug-seeking behavior (Self et al., 1996).

Love is not infinitely complex, so suggests the prairie vole. It is delicate and dynamic, but not unfathomable. Maybe someone ought to remind the Ashley Madison users – you can’t spell love without vole.