We live in a world where fast food 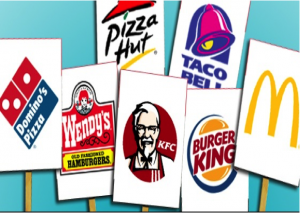 surrounds us at every corner. Many of us find it impossible to turn away from the three-dollar cheeseburger with fries or the double-scoop ice cream sundae. What is it about this food that is so tempting? How do we make choices about the items we eat regularly? According to a recent study, while our explicit knowledge of food’s caloric content might be poor, we are still unconsciously attracted to the most calorically dense foods.

Studies demonstrate that we prefer to gorge on food that contains heaps of calories (Drewnowski, 1998). In Tang et al. (2014), participants were asked to rate the number of calories a specific food contained, and then underwent fMRI while they bid on these individual items. The participants’ explicit judgment of calorie content affirms that we are not exactly experts at estimating the caloric density of our food (which is probably a factor in our unhealthy and costly food choices). However, we are still unconsciously attracted to calorically dense foods, as our brain plays a significant role in determining the reward value of food. Tang and her colleagues observed neural activity in the ventromedial prefrontal cortex (vmPFC), a region that helps us encode the value of stimuli and is active in the desire to consume, as well as willingness to pay (Lawrence et al. 2012; Plassmann et al. 2007).

Furthermore, the researchers exposed functional connectivity between the vmPFC and other regions of the brain that respond to food properties: “This finding is consistent with the theory that the vmPFC draws on sensory information to establish value, integrating responses from brain regions that represent relevant attributes of the stimuli” (Tang et al. 2014, p. 2172). Our brain essentially responds to familiar food cues—such as the dessert menu we hesitantly asked for—in a way that encourages us to go for that piece of chocolate cheesecake even though we know our full stomachs are telling us no.

Additionally, the authors proclaim that caloric density positively correlates with how much we’ll pay, for the participants’ bids were highest for foods with the greatest caloric content. This relationship implies that the ubiquitous high-calorie food in our society becomes even more of an issue when costs are low, making places like McDonalds all the more inviting and likely contributors to a culture in which obesity rates continue to be on the rise. Why buy the Caesar Salad when you can get the six-piece chicken nuggets for only a few bucks more?

These notions exhibit that while our explicit estimates of caloric intake may be off, actual caloric density still affects both our food choice and willingness to pay, and correlates with an appetitive brain network. Our implicit knowledge of caloric density makes us much more motivated to order the platter of nachos, rather than the starter salad, illuminating how a society full of calorically dense fast food and unhealthy options contributes to overconsumption and the obesity epidemic at large.

Good work Jamie. The piece is clear and provides some insightful statements. At times I think your word choice could have been tweaked but otherwise this is a really strong piece.

women and increased body mass index in those with reduced self-control.

willingness to pay in everyday economic transactions. The Journal of