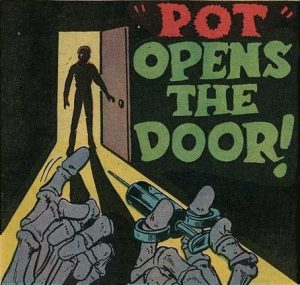 Cannabis, or as it is more commonly known as “marijuana”, is often regarded as the lesser of all evils when looking at drugs of abuse. Although popular opinion deems it to be mild, non-addictive, and safe, cannabis is also referred to as “the gateway drug”, the first drug you do that leads you spiraling down the dark path of
addiction and dependency. However, could it be that there is a lot more truth
in that statement than we originally perceived?

Marijuana is the most commonly used illicit substance in the United States. A recorded 11 million people around the age of 20 reported smoking at least once in 2015 alone1. Its short-term effects include impaired memory, altered senses1 and it can even cause anxiety and paranoia. Its long term effects can have
impacts on academic performance and even alter the structure of your brain2.

In a groundbreaking study performed by Meghan Martz and her colleagues, they found that regular marijuana use can change a person’s brain so that it
increases our reactivity to drugs and in turn it could make other incentives
such as money less desirable and rewarding.

But how could marijuana possibly make something like money less rewarding you may ask? Before we continue with this article, I feel it is important to note a few things. Dopamine is the substance in your brain that allows you to want things. It is incredibly powerful and if the dopamine pathways or dopamine “factories” are damaged, we could put a plate of food on a table across the room from you whilst you were starving and it would be physically impossible to motivate yourself to walk over and grab the food no matter how hungry you were.

In the previously mentioned study, the researchers measured subject’s dopamine release when they gambled. They had the opportunity to either lose a very small amount of money or win a sum equivalent to over 20 times what they would have lost! They noticed that less of this substance called dopamine was released in regular marijuana smokers than in non-smokers signifying that they wanted the money prize less and saw it as less rewarding. This evidence leads to believe that regular marijuana smokers could have an altered perception of life where drugs take on an increased importance whilst other stimuli such as money and potentially also activities such as sex or eating are less enticing.

To illustrate the significance of this finding, we can look at the gambling and betting industry, which bases itself on the drive its patrons have to win money. Money is in of itself a powerful incentive: winning just a small bet pushes people to try and win even larger sums.

We can conclude that marijuana truly lives up to its name as a gateway drug since it encourages our reactivity and response to drugs but it goes past that simple title, it can also make everything in your life about drugs and paint the rest just a little grayer.