Most people find comfort in certainty. People tend to be risk averse, meaning we discount the amount of risk from an expected payoff more than is mathematically reasonable. We would rather have $49 than a 50/50 chance at 100 dollars even though the latter option has an expected payoff of $50. If risk is seen as a negative, then why is gambling such a big industry? Researchers at the University of Warwick and University of Alberta, however, found that it is possible to alter peoples risk preferences, and as a result, make them more likely to gamble.

They found that people were 15% more likely to gamble when they were presented with a cue that reminded them of a time that they gambled and won. The heart of this finding is the power memories have on our decision-making. 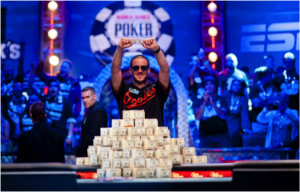 Elliot Ludvig, one of the three authors, said, “Our memories play a very significant role when making certain decisions. We are often risk averse when making decisions when a situation is new to us, but we rely on our memories when the decisions we make are based on past experiences” (1). People using past experiences in their decision making is not a groundbreaking idea. The researchers wanted to find out if people could be manipulated into using a certain memory; so would that change the person’s final decision?

Participants in the study were given the choice between two of the four doors used in the study. Three of the doors had a guaranteed reward. The fourth door, the risky door, had a 50/50 chance of a greater or smaller reward.

Every now and then the participant would be shown one of the fruits that was associated with a specific outcome. This was intended to remind the participant of past memories, whether it be a winning or losing one. The subjects were more likely to gamble and choose the risky option when they were primed with the fruit associated with a winning outcome from taking a risk. Equally as interesting is that subjects’ risk aversion did not increase when they were primed with a negative memory from gambling, a memory of gambling and losing.

Anyone who has ever been in a casino knows that there are constant reminders of money and people winning. Whether through blatant reminders, like the word “Jackpot” flashing in bright lights or subtle ones like the overabundance of gold and green colors, casinos have created a windowless box full of cues intended to influence people to gamble more. The results from the study indicate that this priming has a serious impact on how much people are willing to gamble. No one likes being manipulated, and the structure of casinos makes it clear that businesses will take advantage of priming in order influence their customers. Hopefully, if people are made power that priming has on their decision-making they will able to minimize its effects, and make choices that are more align with their original risk preferences.

Thanks to Dylan Kelley and Maddie Woods and Liam