Do you ever find yourself finishing a piece of chocolate cake with ease after a full course meal? Or maybe you always feel the need to finish a bag of chips once you have opened it. What is the cause for overindulgence in certain foods? New research published from PLoS ONE 2015 suggests that certain foods are capable of promoting addictive behaviors, similar to those in commonly abused drugs. 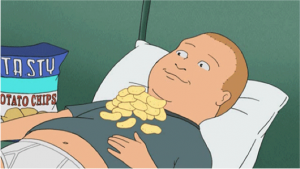 The University of Michigan conducted two different research studies, with over 100 participants, to evaluate which foods were associated with addictive-like eating behaviors. When subjects were asked to identify “problematic” foods, or foods that may cause overeating, highly processed foods, such as chocolate, ice cream, and french fries, were chosen more often than non-processed foods.

What goes up must always come down. For alcoholics, periods of abstinence include intense cravings and physical and psychological pain. This process is commonly referred to as withdrawal. In rat subjects, opiate-like withdrawal symptoms (anxiety, teeth chattering, and aggression) occurred when sugar was removed from their diet. Yet, there are few studies that test the effects of food-related withdrawal in human subjects.

Researchers at Yale University found instances of withdrawal in dieting human subjects. Symptoms included increased irritability, cravings, and temperature dysregulation, similar to symptoms associated with drug withdrawal. However, humans have not always had an innate attraction to highly processed foods: “Humans evolved to prefer foods higher in fat, sugar and salt, but in the quantities and availability these ingredients now occur in processed and refined foods, they appear to have an abuse potential similar to drugs like cocaine and alcohol” (Gearhardt et al. 2011, p. 140). Today, over 60% of Americans are considered obese or overweight. In a society with an abundance of highly processed foods, it is important to understand the high risk of food addiction. Once we understand this abuse potential, our ability to prevent food addiction and the health risks that follow can improve as well.

Eating one piece of cake in moderation is not likely to promote addictive-like eating behaviors or withdrawal. But when does overindulgence become addiction? Although we do not have a set of criteria for food addiction, monitoring the amount of processed foods you eat is one way decrease the likelihood of such addiction.