Have you ever ravenously devoured an entire family-sized bag of chips while catching reruns of your favorite television show? Perhaps you felt as though 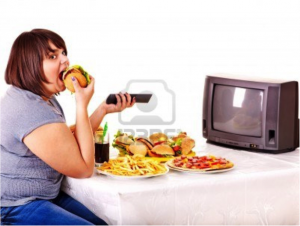 the consumption of all 20 servings was completely outside of your awareness. Research scientists from Yale University have a potential explanation for this overconsumption, and it involves the unconscious priming effects of food commercials on our automatic eating behaviors.

Elementary school children of different ethnicities and socioeconomic classes were measured on the amount of goldfish crackers they consumed while watching an episode of “Disney’s Recess.” What the researchers found was shocking: children who watched commercials that depicted eating as a fun, exhilarating activity consumed 45% more goldfish than those who watched non-food related commercials. “If children were to watch TV daily for 30 minutes and consume food at this high of a rate, they may risk gaining 10 pounds within a year!” lead author Jennifer Harris notes. This prediction considers only half an hour of daily TV viewing. However, according to Time magazine, an average child born after 2005 spends about 35 hours every week watching television (Rothman, 2013). Not only are these children sitting still rather than exercising, they are constantly exposed to the priming effects of these commercials. This finding draws attention to the dangerous role that advertising may play in fueling the obesity epidemic in the United States.

Although our younger generations are at risk, another study suggests that adults are prone to these powerful priming effects as well. University students within the ages of 18-24 watched a comedy excerpt of “Whose Line Is It Anyway?” with commercials interspersed during commercial breaks. Some of the same non-food commercials were shown to everyone, however, the rest differed depending on each group. One group watched commercials promoting unhealthy snacks, another watched commercials promoting nutritious snacks, and the last watched non-food related commercials. After the episode, the students were disconnected from the TV and presented with vegetables, trail mix, snack mix, chocolate chip cookies, and tortilla chips. Researchers found that those who watched the commercials promoting unhealthy foods ate significantly larger amounts of both healthy and unhealthy foods compared to others. These studies show that advertisements can increase eating across different ages and that priming continues even after participants break contact with the television. Additionally, the increase in automatic eating is not specific to unhealthy foods, but occurs with different food groups including vegetables!

If commercials can impact our eating behavior in such a powerful way, how can other stimuli, including billboards and magazine ads, affect us as well? These real world primes can be potentially dangerous if they influence us without our conscious knowledge. Are we truly in control of our behaviors as we would like to think or are we merely consuming machines driven by our external stimuli? One way we can counteract the dangerous effects of advertisements and curb obesity rates is to draw attention to the negative priming effects and educate the public on potential consequences of food commercials.