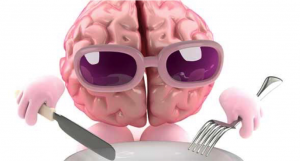 You sit down at a table and you are presented with a choice: hamburger or salad. Everything you know about food tells you to make the healthy choice, but something draws you to the dark side. You may rationally try to ignore the hamburger in front of you, but your brain is drooling over it.

It’s more than just the taste, your brain chemically steers you towards that burger. When you look at that highly caloric hunk, your brain looks back at the history that you have with that particular food. This allows the brain to anticipate the rewards gained from eating that food; in other words, your brain counts calories. Though you might evaluate the health benefits of the salad based on it’s lightness, it’s green-ness and societal reputation as a “good for you food”**, your brain looks at the greasy bread and meat combo and leaves all of that frivolity in the dust. The brain seeks and finds the one thing that it wants: energy.

“Consumption [of unhealthy foods] is largely governed by the anticipated effects of these foods, which are likely learned through experience.” A study at McGill university put this idea to the test. 29 healthy participants were shown photographs of foods familiar to them and were asked to rate, on a scale of 1-20, how much they liked the foods and how many calories they thought the foods contained. Then, participants were given the chance to bid on the items while their brain activity was monitored using a functional brain scan. The bidding process tracked desire; the more the participant desired the food, the more they’d pay.

The experiment revealed that what people were willing to pay for food had no correlation with how much they liked it or the perceived amount of calories. Rather, their bids reflected the actual caloric density of the foods presented: the higher the calorie count, the higher the bid, showing the brain’s ability to implicitly calculate calories. The brain scan revealed that the ventral medial prefrontal cortex, the area of the brain associated with desire and decision making, was most involved in the bidding process, whereas the insula, associated with sensory information, lit up during the “liking” evaluation.

The act of ingesting causes dopamine neurons, which are in charge of desire, to fire. The more caloric the food is, the more dopamine is released. This is because the body is lapping up that extra energy. The brain is always looking for more bang for it’s buck, and the salad simply doesn’t have the same rewarding effect on the body.

The study aimed to find a correlation between awareness of calories and consumption, but found that the brain subconsciously (and accurately!) counts calories on it’s own. So sit down at the table again and look at the hamburger and know that your brain is your worst enemy in the low-calorie quest. With the knowledge that the brain leads you selfishly towards overeating, make your choice.

**not a real quote