The word “calorie” has become so commonly used that people have started to consider it as a key purchase factor. However, many are not even able to take an approximate guess of caloric values of food. Ask around, you wouldn’t be surprised to see some people think an apple has 200 ca while a burger contains 2000 ca.

But is it really true that people are terrible at calorie estimation? Or do our brains have their own ways to manifest their estimating capability?

Some researchers at McGill University suggests that we subconsciously recognize the caloric content of what we eat even if consciously we are clueless. In part of the study, participants are shown pictures of several familiar foods, and asked to guess the range of calories each item contained. It turns out their guesses have no correlation with the true caloric content, which confirms the idea that people are generally bad at estimating calories. 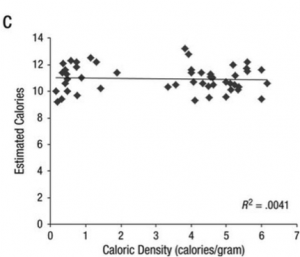 Surprisingly, it is proofed later that their subconscious could actually recognize caloric content by their willingness to pay for food. The same participants are asked to bid for each food item. It turns out that the more calories an item contains, the more money people are willing to pay! 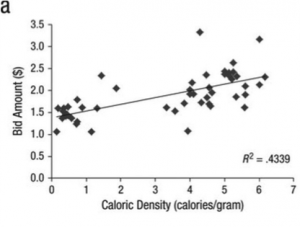 Why the difference? What are our brains calculating that we don’t understand? The truth is, although the participants are poor at explicitly judging caloric content, their brains are actually recognizing caloric density through some neural activities that people normally won’t notice. Their willingness to pay correlates with actual caloric density, so do their brain activities.

The brains’ responses to the food pictures happen in a key brain region called ventromedial prefrontal cortex, which is involved in the computation of subjective value. This brain region collects all the sensory information to establish value. So it is suggested that our brains remember the energy brought by different foods from past experiences. Because energy, which is measured in calories, are crucial to our body to function, we tend to choose food of higher caloric density. This is a survival instinct that has been encoded in our genes.

So far, it seems like our brains have been taking care of us, but there’s a problem – in modern society where people are no longer struggling for their basic survival, our evolutionary instinct may induce overeating.

Nowadays, people are trying to eat more healthily, which means to control the amount of calories they consume each day. However, it is hard to resist a chocolate donut with extra caramel frosting, especially when your brain is coded to make you want it and want it more.

Having known that we are subconsciously drawn to higher-caloric food, we should pause and ruminate before we make future consuming decisions. In the time when survival is not our first priority anymore, it is important that we boost our knowledge of calorie to monitor our daily caloric absorption, especially when our health is highly concerned. Next time when you feel enticed by the dazzling pictures on dessert menu, maybe you want to google the caloric content first.

Acknowledgement:
Prof. Robinson and my roommate Lenny Liang (government major) have provided feedback on this press release. Majorly, I revised the direction, eliminated some scientific use of words, and broke down some long sentences in this paper to make it, hopefully, more approachable.