We all have those nights where we decide to curl up with a bowl of popcorn and settle in for an hour of TV. We impatiently sit through 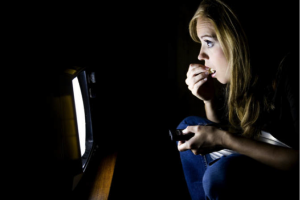 the commercials waiting to get back to our favorite show. The advertisements that flit by as we reach our hand back into the popcorn bowl can’t have an effect on our real world actions. It’s not as if seeing a commercial for delicious potato chips will make us eat more popcorn, right?

Research by Harris, Bargh, and Brownell (2009) at Yale University has found otherwise. Their experiments show that commercials advertising unhealthy snack foods actually increase the amount that we eat during and after viewing, no matter the type of food.

When children were given a snack while watching a television program with various commercial breaks, the researchers found that children shown unhealthy food advertisements ate 45% more goldfish than those who were shown non-food advertisements. At this rate, snacking while watching television with unhealthy food advertisements for only thirty minutes a day would lead to ten extra pounds gained per year. That’s like adding a medium-sized bowling ball to your body every twelve months!  Furthermore, the personal characteristics of the children, such as their height, weight, or even the amount of time since their last meal, had no effect on the results. The only thing that affected the amount eaten was type of commercials viewed and their parent’s rating of how much their child enjoyed goldfish. And who doesn’t like goldfish?

The results of these experiments contradict the notion that food advertisements don’t affect how much you eat, just the brands that you buy. As shown in the second experiment, the effects of the advertisements carry over to new situations and you can’t avoid them just by not snacking while watching television. The obesity epidemic has been growing along with the prevalence of advertisements in our daily lives. It is possible that unhealthy food advertisements have been contributing to the obesity problem in America. The researchers urge that education programs concerning the unconscious effects of unhealthy food advertising are vital. “Increased awareness will be an important first step,” says Harris.

So, the next time you’re watching TV, try changing the channel when that potato chip commercial comes on. Or just close your eyes and cover your ears.

2,789 thoughts on “Shield Your Eyes! How Television Commercials Can Affect Our Eating”