Common sense would suggest that too much TV can lead to obesity due to lack of activity, but recent research at Yale University suggests an additional, more scientific explanation. Two recent studies indicate that exposure to food advertisements can lead to automatic snacking behavior.  This snacking behavior may be a great contributor to the current obesity epidemic.

During the first experiment, 118 children watched the same 14-minute cartoon, broken up by four 30-second commercials. However, the content of the commercials differed by group: in one, the commercials advertised unhealthy foods.  These advertisements, similar to the food advertisements normally directed at children, included messages of fun and happiness. The other half of the children watched commercials that were not food-related. During the viewing, each child was given goldflish crackers and water and told that they could snack while watching. The children who viewed the food advertisements ate a hefty 45% more goldfish than the other group of children. 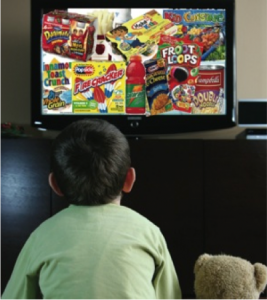 In order to combat obesity, it is crucial to reduce exposure to snack advertisements nationwide. As stated by the U.S. Surgeon General, “Obesity is the fastest growing cause of disease and death in America” (Carmona, 2003). Some measures have been taken by the Council of Better Business Bureaus to make the food in child-directed advertisements healthier, thanks to The Children’s Food & Beverage Advertising Initiative.  However, this initiative only focuses on children 12 and under, while recent experiments clearly indicate that adults are affected as well (Council of Better Business Bureaus, 2012). Research such as this could eventually lead to advertising restrictions, similar to those set for tobacco, to protect public health.

4,703 thoughts on “Are Snack Food Commercials Behind the Obesity Epidemic?”