Nowadays, online gambling has grown to unimaginable heights and some people risk large sums of money to win. Among the popular online gambling sites is a fantasy football website called DraftKings. Unlike normal fantasy football, this website offers the ability for people to join daily or weekly contests where people can win quickly. They can bet 25 cents or up to $10,000, depending on how risky they’re feeling. Dr. Johnson says Draft Kings “has quickly become one of the most addictive gambling websites on the planet.”*  When my friends and I play, we end up making unnecessary risks when we had previously just won a match. The excitement is undeniable but is there a reason for our risky behavior? What was our motivation? Elliot A. Ludvig and his colleagues examined these questions in their study called “Priming Memories of Past Wins Induces Risk Seeking.”

In Ludvig’s study, participants were tested to see if being primed with past winning experiences would influence their future decisions when picking between doors that had hidden values assigned to them. The study involved three fixed values and a “risky choice option” which was either a high value or a low value (See picture below). The participants did many trials picking the various doors with their associated values/primes to gain an understanding of the expected outcome associated with each prime. The researchers then performed trials where the participants were primed into picking a riskier option. 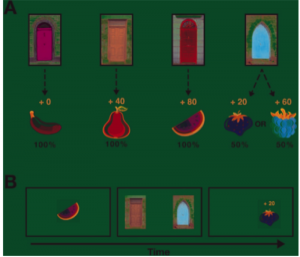 Interestingly enough, when the prime associated with a higher value was displayed on the screen, participants were significantly more risky in their following choices. Participants chose the risky option nearly 57% of the time after being primed for a higher value.

Ludvig’s study shows how important the past is in framing our future decisions. The participants who were risky clearly had a high expectation after being primed. They felt that winning was in their favor. It is often typical that when people are making decisions they think first of past losses. This study, with its primes, creates a bias in the minds of the participants to choose more riskily as a result of their previous success. This study should serve as a caution for regular gamblers to pause and think before they risk losing big money in a game. Next time I play DraftKings I will certainly try to alleviate risky bets based on my past experiences, no matter how positive these previous memories might have been.