Contrary to popular belief, most people who experiment with drugs do not become addicts. In fact, only 15-17% of drug users become addicted (Deroche-Gamonet et al., 2004). If drug use alone does not guarantee addiction, when does addiction occur? Some researchers emphasize the importance of prolonged drug use while others emphasize individual vulnerability. Our current understanding of when and why drug users develop addiction is lacking. According to Dr. Véronique Deroche-Gamonet of the University of Bordeaux, “Progress has been slow due to the lack of animal models of addiction.”*

Drug use is not unique to humans. Monkeys will work to obtain THC, the active ingredient in marijuana (Tanda et al., 2000). Even honey bees will drink alcohol (Abramson et al., 2000). Animal models have advanced our understanding of drug use. However, drug use and drug addiction are not the same. According to Dr. Deroche-Gamonet, “Addiction is a chronic relapsing disorder in which compulsive drug use is maintained despite negative consequences.”*

A new study in Science led by Dr. Deroche-Gamonet suggests that rats can develop cocaine addiction. In this study, the researchers trained rats to self-administer cocaine. After 3 months of use, the rats were denied access for a short time before being re-exposed to cocaine. Upon re-exposure, 40% of the rats displayed a high level of cocaine seeking, indicating that they had relapsed. 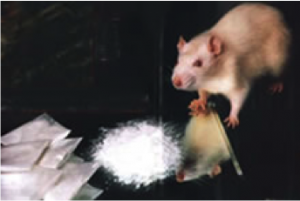 These “relapsing” rats showed greater levels of 3 addiction-like behaviors from the DSM-IV which is used for human diagnosis. Human addicts have difficulty limiting drug intake and will work hard to obtain drugs. Similarly, during the 3 months of cocaine use, the “relapsing” rats showed higher levels of cocaine seeking and were willing to work harder to obtain cocaine than the “non-relapsing” rats. Over time, the “relapsing” rats increased their cocaine seeking and the amount of work they performed. These behaviors decreased for the “non-relapsing” rats. When the researchers paired the cocaine doses with electric shocks, the “relapsing” rats continued to use cocaine. Like human addicts, these rats continued to use the drug despite negative consequences. In fact, their cocaine use actually increased over time! In contrast, the “non-relapsing” rats reduced their drug intake.
These results provide evidence that rats can develop drug addiction. The development of an animal model of addiction will finally allow researchers to distinguish drug addiction from drug use. Additionally, the rats displayed addiction-like behaviors only after extended use, suggesting that prolonged drug use is required for the development of addiction. However, as with humans, only a fraction of rats displayed these behaviors, suggesting that some individuals are indeed more vulnerable to developing drug addiction than others.When the researchers scored each rat for the 3 addiction-like behaviors, only 17% of the rats scored positive for all 3 criteria, very similar to the 15-17% of human users that develop addiction. Rats that met either none (41%) or all 3 criteria (17%) used the same amount of cocaine during the 3 months of self-administration. Therefore, rats that simply exhibited drug use, and rats that appeared to develop drug addiction used equivalent amounts of cocaine.

429 thoughts on “Do All Drug Users Become Addicts?”